Wells is a town in Cherokee County, Texas, United States. The population was 790 at the 2010 census.

According to the United States Census Bureau, the town has a total area of 2.0 square miles (5.2 km2), all of it land.

Wells is at the junction of U.S. Highway 69 and Farm Road 1247, twenty-three miles south of Rusk in extreme southern Cherokee County. It was established in 1885 as a stop on the newly constructed Kansas and Gulf Short Line Railroad and was named for Maj. E. H. Wells, a civil engineer for the railroad. A post office opened in 1886, and by 1890 the town had a sawmill, a hotel, a Methodist church, three general stores, and a population of fifty. Shortly after the railroad was completed, the state penitentiary established a satellite camp just outside the town to produce charcoal for the state-run iron works at Rusk. The presence of the prison camp discouraged many potential settlers, and the town's population remained small until after 1900, when the charcoal camp was closed. During the 1910s, however, the town boomed; the First State Bank of Wells opened in 1913, and the following year the population reached 300. During the 1920s the community incorporated, and in 1936 Wells reported 475 residents and twenty businesses. The population continued to grow after World War II, rising to 761 by 1990. Over the same period, however, the number of businesses has gradually declined, falling from twenty-six in 1952 to seven in 1990. Farming, cattle ranching, and lumber are the principal industries.

There were 275 households, out of which 30.9% had children under the age of 18 living with them, 50.2% were married couples living together, 13.8% had a female householder with no husband present, and 30.5% were non-families. 28.0% of all households were made up of individuals, and 15.6% had someone living alone who was 65 years of age or older. The average household size was 2.55 and the average family size was 3.13.

Lack of transportation forced most children to walk to school, so for that reason small schoolhouses were scattered at five-mile (8 km) intervals throughout Cherokee county. About 50 of these schoolhouses existed in the county in the 1870s. These schools were usually located in a church or a one-room building. Many of these small community schools sprang up near saw mills and other operations. The earliest schools in the Wells vicinity were at Shook's Bluff, Mt. Hope, Pleasant Hill, Damascus, Forest and Sweet Union communities. In 1884, boundaries were redrawn and 69 new school districts were formed in Cherokee County. 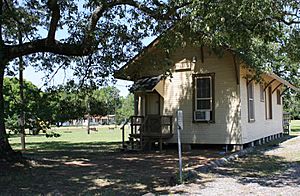 Forest School was established in 1888 in the Forest Baptist Church, and later occupied a separate building on a lot donated by J. S. Derrough, Jeff Latham, and Hugh Henry. In 1922, Forest School consolidated with the Wildhurst School from the Chronister Lumber Company Camp and a new building was built on the old Jim Hogg Highway north of the Baptist Church in Forest. The new building housed the elementary and three unaccredited high school grades. Forest School consolidated with Wells ISD in 1949.

There were two Mt. Hope Methodist church schools. The first school was established in 1875 and the first teachers were H.S.P. Espie and John Clifford. The other Mt. Hope school consisted of a single 20 x 20 room and all grades were taught by one teacher. Classes were held for three months in the winter and during two summer sessions. Nathan Fulton, the first teacher, was paid $40 a month for his services. Other teachers were Jasper Starling, Asilee Hyde, Charlie Bowden, Quarles McClure, and George B. Terrell.

When Wells began to prosper as a result of the Kansas and Gulf Short Line Railroad reaching the town in 1885, the Mt. Hope school was moved to the Methodist church in town. Classes later moved to a two-story brick building on the present school site. That building burned in 1917 and was replaced by a similar structure build on the original faulty foundation. When a crack appeared in the back wall a few years later, the school was reduced to a single story. About that time Damascus and Crossroads schools consolidated with Wells and three high school grades were added.

As transportation facilities continued to improve, all the county's small school districts were gradually absorbed into the 5 school districts that exist today: Wells, Alto, Rusk, Jacksonville, and New Summerfield.

All content from Kiddle encyclopedia articles (including the article images and facts) can be freely used under Attribution-ShareAlike license, unless stated otherwise. Cite this article:
Wells, Texas Facts for Kids. Kiddle Encyclopedia.