Kids Encyclopedia Facts
Not to be confused with Rusk, Texas. 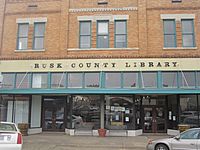 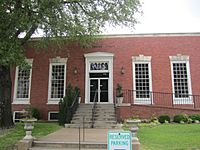 Rusk County is a county located in the U.S. state of Texas. As of the 2010 census, its population was 53,330. Its county seat is Henderson. The county is named for Thomas Jefferson Rusk, a secretary of war of the Republic of Texas.

Originally a part of Nacogdoches County, Rusk was established as its own county by the Congress of the Republic of Texas on January 16, 1843. By 1850, it was the second most populous county in Texas out of the 78 counties that had been organized at that time, according to the 1850 census. Rusk County's population was 8,148 at this time; it was surpassed only by Harrison County with 11,822 people.

With the discovery of oil in Henderson in October 1930, an oil boom began that caused county population to nearly double during the next decade and caused dramatic changes in the county towns. Rusk is one of the five counties that is part of the East Texas Oil Field, whose production has been a major part of the economy since that time.

Rusk County was one of twenty-five entirely dry counties in the State of Texas until January 2012. The city of Henderson at that time opted to sell and serve beer and wine.

Sadly, America's worst school disaster happened in Rusk County in 1937 when nearly 300 people, most of them children, were killed in a natural gas explosion at the New London Consolidated School.

All content from Kiddle encyclopedia articles (including the article images and facts) can be freely used under Attribution-ShareAlike license, unless stated otherwise. Cite this article:
Rusk County, Texas Facts for Kids. Kiddle Encyclopedia.