Kilgore is a city in Gregg and Rusk counties in the eastern part of the U.S. state of Texas. Over three-fourths of the city limits is located in Gregg County, the remainder in Rusk County. Kilgore was the childhood residence from age six of the noted classical pianist Van Cliburn, the namesake for Van Cliburn Auditorium on the Kilgore College campus. The population was 12,975 at the 2010 census; and the population is 14,820 at the 2020 census.

Kilgore was founded in 1872 when the International–Great Northern Railroad completed the initial phase of rail line between Palestine and Longview. The rail company chose to bypass New Danville, a small community about 10 miles (16 km) southeast of Longview, in lieu of a new townsite platted on 174 acres (0.70 km2) sold to the railroad by Constantine Buckley Kilgore, the town's namesake. That way the railroad gained the profits from sale and development of these lands.

The new town received a post office in 1873 and, with a station and transportation for getting commodity crops to market, soon began to draw residents and businesses away from New Danville. By 1885, the population had reached 250, and the community had two cotton gins, a church, and its own school. The racially segregated Kilgore Independent School District was organized in 1910. By 1914 the town had two banks, several businesses, and a reported population of 700. The 1920s showed continued steady growth, and by 1929 Kilgore was home to an estimated 1,000 residents.

Prosperity came to a halt, however, when Kilgore was dealt severe blows by a steep decline in cotton prices (on which most of the town's economy was still based), and the effects of the Great Depression. Businesses began to close and, by the middle of 1930, the population had fallen to 500; the community appeared destined to become a ghost town. Black people joined the Great Migration out of the South to northern, midwestern, and western cities for work.

Kilgore's fortunes changed dramatically on October 3, 1930, when wildcatter Columbus M. "Dad" Joiner struck oil near the neighboring town of Henderson. This well, known as the Daisy Bradford #3, marked the discovery of the vast East Texas Oil Field. Seemingly overnight Kilgore was transformed from a small farming town on the decline into a bustling boomtown. The Daisy Bradford #3 was subsequently followed by the Lou Della Crim No. 1 and many others. By 1936, the population had increased to more than 12,000, and Kilgore's skyline was crowded with oil derricks.

Oil production continued at a breakneck pace throughout the early 1930s, with more than 1,100 producing oil wells within city limits at the height of the boom. The explosive growth left most civic services overwhelmed, and as a result Kilgore was forced to incorporate in 1931. With the city flooded with male workers and roustabouts, law enforcement struggled to keep order among the shanties, tents, and ramshackle honky-tonks that crowded Kilgore's main streets. On one occasion, they had to summon help from the Texas Rangers to keep the peace.

By the mid-1930s the oil boom had begun to subside, and most of the small oil companies and wildcatters had sold out to major corporations. The boom was essentially over by 1940. But oil production has remained central to the city's economy. The population, which fluctuated wildly throughout the 1930s, stabilized at around 10,000 in the 1950s. A 2015 estimate placed it at just under 15,000 residents. 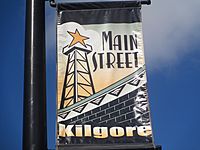 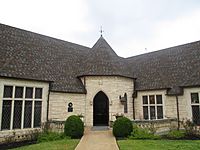 In 2001, the Kilgore College Ranger football team had a perfect season, winning the Southwest Junior College Football Conference. The 2001 squad finished #2 in the nation, losing the NJCAA national championship when the coaches poll gave the championship to Georgia Military College.

On December 18, 2004, the Kilgore High School "Ragin' Red" Bulldog football team completed a perfect season (16-0) after winning the Class 4A Division II state championship game, 33-27, in a double-overtime thriller against the Dallas Lincoln Tigers at Baylor University's Floyd Casey Stadium in Waco. Nick Sanders blocked a potential go-ahead field goal attempt by Lincoln and returned it for the winning touchdown. 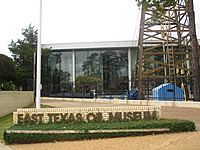 The East Texas Oil Museum is located on the campus of Kilgore College.

All content from Kiddle encyclopedia articles (including the article images and facts) can be freely used under Attribution-ShareAlike license, unless stated otherwise. Cite this article:
Kilgore, Texas Facts for Kids. Kiddle Encyclopedia.