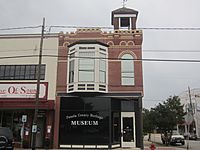 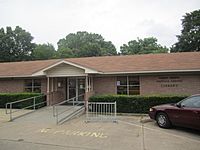 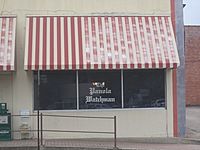 The Panola Watchman newspaper was first published in 1873 in Carthage by Tom M. Bowers (1837-1916), a Confederate veteran who earlier printed the Carthage Banner.

Panola County is a county located in the U.S. state of Texas. As of the 2010 census, its population was 23,796. The county seat is Carthage. Located in East Texas, the name of the county is derived from a Native American word for cotton.

Until 2013, Panola County was one of about 30 entirely dry counties in Texas, which means that the sale of alcohol was restricted or prohibited. In 2013, local options for alcohol sales were added to the November election ballots and passed, permitting the sale of beer and wine in stores and the sale of mixed beverages at restaurants.

Panola County was formed in 1846 from sections of Harrison and Shelby Counties. It was named after a Choctaw/Chickasaw word for cotton.

All content from Kiddle encyclopedia articles (including the article images and facts) can be freely used under Attribution-ShareAlike license, unless stated otherwise. Cite this article:
Panola County, Texas Facts for Kids. Kiddle Encyclopedia.