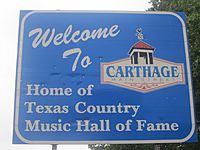 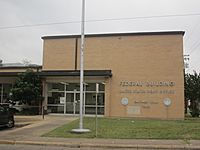 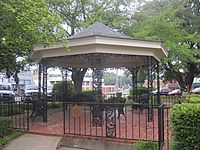 Anderson Park is located in the center of downtown Carthage. 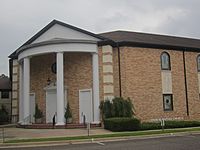 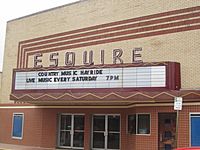 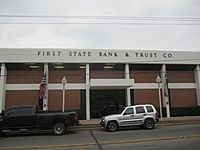 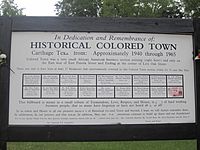 An African American community lived in Carthage from East Panola to Live Oak streets from 1940 to 1965.

Carthage is a city in Panola County, Texas, United States. This city is one hundred and fifty miles southeast of Dallas. The population was 6,779 at the 2010 census. It is the county seat of Panola County, and is situated in East Texas near the Louisiana state line.

There were 2,628 households out of which 29.8% had children under the age of 18 living with them, 45.6% were married couples living together, 16.4% had a female householder with no husband present, and 33.6% were non-families. 30.5% of all households were made up of individuals and 14.8% had someone living alone who was 65 years of age or older. The average household size was 2.45 and the average family size was 3.04.

The Texas Country Music Hall of Fame is located in Carthage, which also houses the Tex Ritter museum. The Jim Reeves Memorial is located just on the outskirts of Carthage, east on U.S. 79. Reeves and Ritter were from the nearby unincorporated communities of Galloway and Murvaul, respectively.

Panola County Heritage Museum is located at 100 East Sabine Street across from the gazebo in downtown Anderson Park.

The climate in this area is characterized by hot, humid summers and generally mild to cool winters. According to the Köppen Climate Classification system, Carthage has a humid subtropical climate, abbreviated "Cfa" on climate maps.

All content from Kiddle encyclopedia articles (including the article images and facts) can be freely used under Attribution-ShareAlike license, unless stated otherwise. Cite this article:
Carthage, Texas Facts for Kids. Kiddle Encyclopedia.