DeSoto Parish (French: Paroisse DeSoto) is a parish located in the U.S. state of Louisiana. The parish was formed in 1843. At the 2010 U.S. census, the population was 26,656; at the 2020 census, its population increased to 26,812. Its parish seat is Mansfield. DeSoto Parish is part of the Shreveport–Bossier City metropolitan statistical area.

It is a typical misconception that the parish was named after Hernando de Soto, the Spaniard who explored the future southeastern United States and discovered and named the Mississippi River. The parish was in fact named after the unrelated Marcel DeSoto, who led the first group of European settlers there, to a settlement historically known as Bayou Pierre. The parish's name is also commonly misspelled following the explorer's name as "De Soto Parish," but it is properly spelled following the settler's name as "DeSoto Parish."

The Battle of Mansfield was fought in DeSoto Parish on April 8, 1864. General Alfred Mouton was killed in the fighting, but his position was carried forward by Prince de Polignac, a native of France. The battle is commemorated at the Mansfield State Historic Site four miles south of Mansfield off Louisiana Highway 175. The Confederate victory prevented a planned Union invasion thereafter of Texas. Mansfield, also known as the Battle of Sabine Crossroads, a Confederate victory, occurred with one year and one day left in the duration of the war. Mansfield was quickly followed by the Battle of Pleasant Hill to the south. 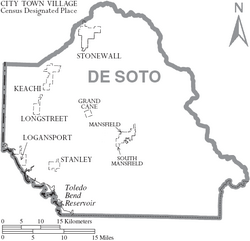 Public schools in DeSoto Parish are operated by the DeSoto Parish School Board. It is in the service area of Bossier Parish Community College.

All content from Kiddle encyclopedia articles (including the article images and facts) can be freely used under Attribution-ShareAlike license, unless stated otherwise. Cite this article:
DeSoto Parish, Louisiana Facts for Kids. Kiddle Encyclopedia.