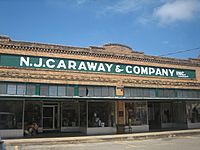 The Veterans Memorial in Logansport 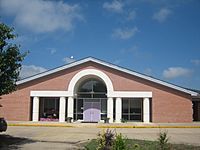 Logansport is a town in western DeSoto Parish adjacent to the Sabine River in western Louisiana, United States. The population was 1,555 at the 2010 census. It is part of the Shreveport–Bossier City Metropolitan Statistical Area.

The area, long a disputed boundary even after the Louisiana Purchase, was part of a neutral territory negotiated by Gen. James Wilkinson and Lt. Col. Simón de Herrera on November 6, 1806.

The Adams–Onís Treaty of 1819, that was not ratified until 1821, would have been a solution but in 1921 Mexico's independence reignited the dispute. Dr. Logan moved to the area in 1830 began practicing medicine in Louisiana and Texas. He chartered a ferry business in the area and it became known as Logan's Ferry.

The name Logansport was given to the town when a post office was established February 28, 1848. There were few people living in the town prior to the arrival of the railroad. With the arrival of the railroad, there was an influx of gamblers and others of questionable character, along with the citizens of better repute. At one time Logansport had more saloons than grocery stores. The town began to grow and it was incorporated. The first election was held on June 25, 1887. In this election there were only 15 qualified voters listed. Elijah Price was elected Mayor along with 5 other trustees. Oil and gas were also a very important source of income for the early citizens of Logansport.

The Logansport riverfront is an entrance off U.S. Highway 84 into Louisiana from Texas. It has a terraced landscape, veteran's memorial, walking paths, gazebo, picnic tables, and a pavilion. Logansport offers activities throughout the year for families to enjoy.

There were 656 households, out of which 34.0% had children under the age of 18 living with them, 43.0% were married couples living together, 20.1% had a female householder with no husband present, and 32.8% were non-families. 30.6% of all households were made up of individuals, and 17.5% had someone living alone who was 65 years of age or older. The average household size was 2.48 and the average family size was 3.11.

All content from Kiddle encyclopedia articles (including the article images and facts) can be freely used under Attribution-ShareAlike license, unless stated otherwise. Cite this article:
Logansport, Louisiana Facts for Kids. Kiddle Encyclopedia.