Harrison County is a county on the eastern border of the U.S. state of Texas. As of the 2010 census, its population was 65,631. The county seat is Marshall. The county was created in 1839 and organized in 1842. It is named for Jonas Harrison, a lawyer and Texas revolutionary.

Harrison County, formerly a Democratic party stronghold, is represented in the Texas House of Representatives by Republican Chris Paddie, a former Marshall mayor. 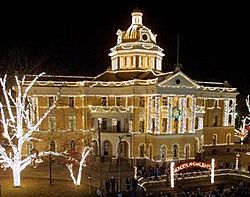 The county's area was reduced in 1846, following the establishment of Panola and Upshur counties. Marshall was established in 1841, and became the county seat in 1842.

The area was settled predominately by planters from the Southern United States, who developed this area for cotton plantations and brought African-American slaves with them for labor, or purchased them in the area. The planters repeated much of their culture and society here. By 1850, landowners in this county held more slaves than in any other county in Texas until the end of the Civil War. The census of 1860 counted 8,746 slaves in Harrison County, 59% of the county's total population.

In 1861, the county's voters (who were exclusively white and mostly upper class) overwhelmingly supported secession. Defeat at the end of the war brought Reconstruction. The white minority in the county bitterly resented federal authority and giving the franchise to freedmen, who elected a county government dominated by Republican Party officeholders. Republican dominance continued in the county after 1874, when the Democratic Party gained control of the state government. In 1878, the Citizen's Party of Harrison County, amid charges of fraud and coercion, gained control of elected positions in the county government after winning on a technicality, which involved placement of a key ballot box. In 1951, Harrison County's Jim Crow laws were struck down with the Perry v. Cyphers decision.

From 1880 to 1930, Harrison County remained primarily agricultural and rural, with a black majority, many of whom were tenant farmers and sharecroppers. In the 1870s the county's non-agricultural sector increased when the Texas and Pacific Railway located its headquarters and shops in Marshall. In 1928, oil was discovered in the county, and made a significant contribution to the economy.

The Great Depression of the 1930s hit the county hard, decimating the agricultural sector. World War II brought an end to the depression, but resulted in a significant emigration of blacks from the county. They moved to the West Coast in the Great Migration, as the defense industry was expanding so that many jobs were available. The population of the county declined until 1980, when the trend reversed. White population increases due to migration from other areas has resulted in a majority-white population. White conservative voters have become overwhelmingly Republican in the realignment of parties in the South since the late 20th century.

The largest ancestry groups in Harrison County are:

All content from Kiddle encyclopedia articles (including the article images and facts) can be freely used under Attribution-ShareAlike license, unless stated otherwise. Cite this article:
Harrison County, Texas Facts for Kids. Kiddle Encyclopedia.