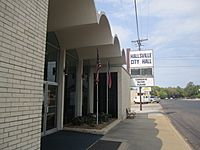 Hallsville City Hall is located on the main thoroughfare of the community, U.S. Highway 80. 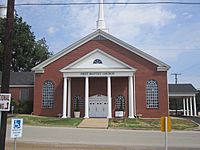 Hallsville is at the intersection of U.S. Highway 80 and Farm Road 450, on the Union Pacific Railroad twelve miles west of Marshall in southwestern Harrison County. The area was first settled in 1839, when Fort Crawford was built one mile west of the site of present Hallsville by W. C. Crawford as a protection against Indians. In 1849 the fort is reported to have had a post office and a two-story building that served as church, Masonic hall, and school (the only school in western Harrison County until 1868). In 1869, when an independent Southern Pacific Railway crossed a mile north of Fort Crawford, the settlers moved to the railroad and named the new settlement for a railroad official. All that remains at the original location is a cemetery. A post office named Hallville opened in 1869, and the first business in the new community was a saloon. From 1869 to 1872 the town was the terminus of the railroad, and the railroad company built a general office and machine shops there. The community incorporated for the first time in 1870 and was a boom town, with as many as fifty businesses, in the early 1870s. Hallville shipped cotton, wool, and hides. In 1872, when the Texas and Pacific acquired the railroad and built out to Longview in Gregg County, Hallville lost much of its western trade. In 1873 the railroad moved its local headquarters and shops to Marshall. Hallville's incorporation lapsed, and the community lost many of its people to Marshall in the later 1870s. In 1884 it had an estimated 600 inhabitants, three churches, six sawmills, six grist mill-gins, a hotel, two saloons, and a cooperative association. By 1892 the population had fallen to 300, but it recovered to 600 in the 1900s. In 1904 the Hallville school district had two schools serving 180 white pupils and one school serving 111 black pupils. A bank opened in the community in 1909. In the 1920s the post office changed the spelling of its name to Hallsville. The community reincorporated in 1935.

Until 2003, Hallsville had only one traffic light, located at the main intersection at Main Street (HWY 80) and FM 450. The town has experienced rapid growth in the past decade and now boasts five traffic lights, a larger corporate grocery store chain, a medical and dental clinic, two dollar stores and several fast-food chains. The heart and pulse of the community still lies in its school functions, particularly sporting events.

Many new subdivisions have started popping up in Hallsville, TX. The school districts are top notch.

Started in 1972, in an effort to raise funds for the city park, Lawrence and Eulyne LaFoy, along with a group of other citizens, had the idea of holding a horse show and tack sale. The local riding club, the Chamber of Commerce and the city came forth to execute the LaFoy's idea. Hallsville's goal was to raise funds for a matching government grant for the beautification and updating of the city and celebrate living in the Hallsville community. Trophies were donated, entry fees were donated and the funds went to the city park. From that beginning a Western Days committee was formed and have carried on the tradition since. The event opens (Usually the first Weekend in October) on Friday morning when students and staff of Hallsville High School come to school in western attire and activities are held on the campuses. Western Days has grown from a one-day event to a three-day event. The three-day event includes a street dance, parade, arts and crafts booths, chili cookoff, bike decorating contest, live bands, Fun Run, Drumline performance, Civil War Reenactment, and the Miss Hallsville Western Days Program. Miss Hallsville Contestants are introduced at around 7:00 PM prior to the Friday night Hallsville Bobcat football game in Bobcat Stadium.

In 2006, the decision was made to set the date for Western Days as the first weekend in October every year, while it had previously been planned around a home football game weekend.

The annual "H" Association banquet is held the Saturday before Easter each year H Association members and Hallsville Lettermen from all over the area attend this annual banquet. Each year at this banquet, the new inductee or inductees are announced. Also, the athlete of the year (who is chosen by the Hallsville coaches) is announced, which started in 1950.

In 1963 an "H" Association board of trustees was formed. Hulon Blalock, Joel Dorsey, Winnifred Haggard, William Lawrence, Bill Dick Parker, Elgin Poole, Willie Steven, D.M Summers, Pres Young and Edd Young were elected to the board. Edd Young was elected as chairman and remained chairman till his death on January 2, 2002. Harrison County Commissioner, James Greer was elected to take his place as chairman in 2002.

According to the United States Census Bureau, the city has a total area of 2.3 square miles (6.0 km2), all of it land.

There were 993 households, out of which 48.6% had children under the age of 18 living with them, 62.8% were married couples living together, 14.8% had a female householder with no husband present, and 19.5% were non-families. 17.8% of all households were made up of individuals, and 7.5% had someone living alone who was 65 years of age or older. The average household size was 2.79 and the average family size was 3.16.

The climate in this area is characterized by hot, humid summers and generally mild to cool winters. According to the Köppen Climate Classification system, Hallsville has a humid subtropical climate, abbreviated "Cfa" on climate maps.

The city is served by the Hallsville Independent School District.

All content from Kiddle encyclopedia articles (including the article images and facts) can be freely used under Attribution-ShareAlike license, unless stated otherwise. Cite this article:
Hallsville, Texas Facts for Kids. Kiddle Encyclopedia.