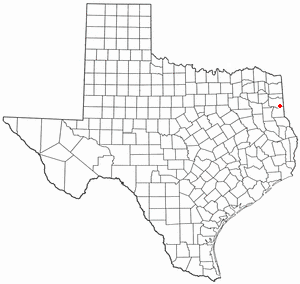 Elysian Fields is a rural unincorporated community in Harrison County, Texas, United States. It lies 11 miles southeast of the county seat of Marshall.

The community was originally the site of a Caddo village named Big Springs. An American from New Orleans, Capt. Edward Smith, visited the village in 1817 and compared its beauty to the Elysian Fields of Greek Mythology. Smith and his family settled in the area in the 1830s. In 1910 the community relocated one mile to the west, so it could be linked to a railroad. The community is now the center of the Elysian Fields Independent School District.

All content from Kiddle encyclopedia articles (including the article images and facts) can be freely used under Attribution-ShareAlike license, unless stated otherwise. Cite this article:
Elysian Fields, Texas Facts for Kids. Kiddle Encyclopedia.