Kids Encyclopedia Facts
For counties with a similar name, see Marion County (disambiguation).
Not to be confused with Marion, Texas.

Marion County is a county located in the U.S. state of Texas. As of the 2010 census, its population was 10,546. Its county seat is Jefferson. Marion County is in East Texas and is named for Francis Marion, the Revolutionary War general from South Carolina who was nicknamed the "Swamp Fox".

The farming Caddoan Mississippian culture dates as far back as 200 BCE in the area. The Hernando de Soto expedition of 1541 resulted in violent encounters. Spanish and French missionaries brought a smallpox, measles malaria and influenza epidemics against which the Caddo had no immunity. Eventually, the Caddo were forced to reservations. Shashidahnee (Timber Hill) is the last known permanent Marion County settlement of the Caddo people. The 19th Century saw Shawnee, Delaware, and Kickapoo in the area.

The majority of the settlers migrated from other southern states and brought with them their slaves, who were 51 percent of the population in 1860. In 1861, the county voted unanimously for secession from the Union. The county benefitted financially from Confederate government contracts.

One of the county’s most famous disasters occurred in February, 1869 when the steamboat Mittie Stephens caught fire from a torch basket that ignited a hay stack on board. Sixty-one people died, either from the fire or from being caught in the boat’s paddlewheel as they jumped overboard.

On October 4, 1869, George Washington Smith, a delegate to the Constitutional Convention, was murdered by a band of vigilantes while incarcerated in Jefferson. Smith's slaying led to occupation of Jefferson by military troops who offered protection for the black majority.

Republican presidential races benefited from the black majority in the county. In 1898, the White Primary went into effect and disfranchised the black vote.

The Marion County brick courthouse was erected in 1914, architect Elmer George Withers. Outside the building the Dick Taylor Camp of Confederate veterans erected a monument to honor the county’s dead in the American Civil War.

Caddo Lake State Park was first proposed in 1924. 1933-1937 the Civilian Conservation Corps made improvements to the park. The Army barracks and mess hall were converted to log cabins and a recreation hall for park goers. 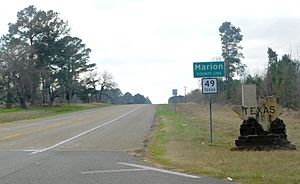 The largest ancestry groups in Marion County are:

All content from Kiddle encyclopedia articles (including the article images and facts) can be freely used under Attribution-ShareAlike license, unless stated otherwise. Cite this article:
Marion County, Texas Facts for Kids. Kiddle Encyclopedia.