Upshur County is a county located in the eastern part of the U.S. state of Texas. As of the 2010 census, the population was 39,309. The county seat is Gilmer. The county is named for Abel P. Upshur, who was U.S. Secretary of State during President John Tyler's administration.

Humans have inhabited what is now Upshur county since at least 10,000 years ago. The Caddoan people lived in this area, but were driven out about 1750, probably due to losses from new infectious diseases carried chronically by Europeans.

Later some Cherokee migrated to the area from their territories in the Southeast - Georgia and Alabama. The Cherokee were driven out of here by European-American settlers in 1839, after having been removed from the Southeast.

The first European-American settler in Upshur county was probably Isaac Moody, who settled there in 1836. Upshur County was named for Abel Parker Upshur, Secretary of State under John Tyler.

Upshur County has the distinction of being the county that has the largest settlement in Texas organized by the Church of Jesus Christ of Latter-day Saints. In 1904 the Latter-day Saint South-western States Mission organized a colony at Kelsey, Texas. 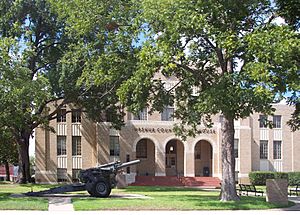 All content from Kiddle encyclopedia articles (including the article images and facts) can be freely used under Attribution-ShareAlike license, unless stated otherwise. Cite this article:
Upshur County, Texas Facts for Kids. Kiddle Encyclopedia.