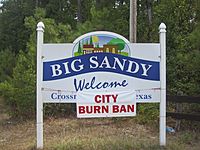 A burn ban was declared in Big Sandy in the summer of 2011. 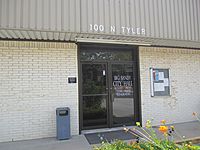 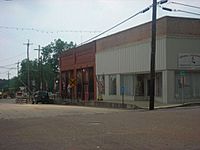 A glimpse of downtown Big Sandy 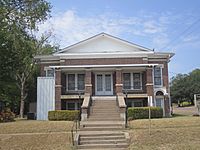 First Baptist Church in Big Sandy is located across from City Hall downtown. 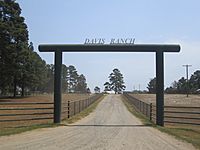 Big Sandy is a town in Upshur County, Texas, United States. As of the 2010 census, the town's population was 1,343. A lake of the same name is cut nearly in half by U.S. Highway 80, the main thoroughfare of Big Sandy. It lies directly west of the larger cities of Gladewater and Longview.

The Sabine River flows just south of Big Sandy. In the 19th century, Walters' Bluff Ferry operated on the Sabine, with passage across costing 40 cents per person and up to 75 cents for wagons.

There were 532 households, out of which 32.7% had children under the age of 18 living with them, 47.4% were married couples living together, 13.2% had a female householder with no husband present, and 35.7% were non-families. 34.4% of all households were made up of individuals, and 17.9% had someone living alone who was 65 years of age or older. The average household size was 2.42 and the average family size was 3.11.

Big Sandy is located about 14 miles (23 km) southwest of Gilmer, Texas, at the intersection of U.S. Highway 80 and Texas State Highway 155 in Upshur County. It was established shortly after the American Civil War. The settlement was first known as Big Sandy Switch because a stretch of the Texas and Pacific Railroad was built through the area and eventually intersected with a narrow-gauge railroad called the Tyler Tap. A post office was followed by a newspaper, stores and churches. In 1926 the settlement was incorporated as Big Sandy, with a population of about 850.

During the 1950s, Big Sandy became linked to a religious movement that would greatly influence the community for four decades. Local resident Buck Hammer was a member of the Radio Church of God (which later became known as the Worldwide Church of God [WCG]), a California-based, Sabbatarian movement headed by radio evangelist Herbert W. Armstrong. Hammer donated a small parcel of land (less than 10 acres) to the church, which built a meeting hall and began holding annual church conventions there by the middle 1950s.

The church in subsequent years bought hundreds more acres adjacent to the original site. Thousands of church members converged on Big Sandy and surrounding communities for the week-long Feast of Tabernacles each year, creating a significant economic impact. In the mid-1960s Armstrong developed more of the property and established a second campus of Ambassador College, the original campus of which continued to operate at the church's headquarters facility in Pasadena, California. The presence of the college, along with the annual convention operation, influenced hundreds of church members to relocate to Big Sandy and the surrounding area over the years. Although Ambassador ceased operations in 1997, many families once affiliated with it and the church chose to remain in the Big Sandy area.

In March 2000, the campus was sold and was developed as the International ALERT Academy. It is the home of the Air Land Emergency Resource Team (ALERT), a Christian program training young men in disaster relief and emergency services. The Academy also serves as a camp and conference center, and holds four-week summer programs for boys and girls. ALERT is affiliated with evangelical minister Bill Gothard.

In the late 1970s, local residents Jerry and Anita Gentry began a mail-order business from their home in Big Sandy and called it Annie's Attic. The business grew rapidly into a multimillion-dollar enterprise, publishing magazines and catalogs for needlecraft enthusiasts. After the couple divorced in the early 1980s, Anita continued to preside over Annie's Attic, while Jerry launched a near-replicate business called The Needlecraft Shop, also in Big Sandy. By the 1990s, both businesses had been purchased in separate transactions by Dynamic Resource Group (DRG), a publishing company in Berne, Indiana. DRG management moved the operations of both companies to Indiana. Before doing so it established a new company, Strategic Fulfillment Group (SFG), on the southwest edge of Big Sandy. SFG, which handles mailing and subscription fulfillment for DRG and other clients, is now Big Sandy's and Upshur County's largest employer.

The Big Sandy High School football team won three Texas Class B state championships, in consecutive years 1973-75. Although the state finals game in 1974 ended in a 0-0 tie (vs Celina), UIL granted both teams co-championships. In 2005, the Wildcats again reached the state 1-A finals, falling 21-20 to Stratford.

The 1975 team set a then national record of 824 points scored in a season while posting a 14-0 record, a record which remained unbroken until 1994. The team included later notable NFL stars such as David Overstreet, a former running back for the Oklahoma Sooners and Miami Dolphins, and Lovie Smith, former head coach of the Chicago Bears. Other notable alumni include David Norman, former head football coach and current athletic director at Austin College.

The Town of Big Sandy is served by the Big Sandy Independent School District.

All content from Kiddle encyclopedia articles (including the article images and facts) can be freely used under Attribution-ShareAlike license, unless stated otherwise. Cite this article:
Big Sandy, Texas Facts for Kids. Kiddle Encyclopedia.