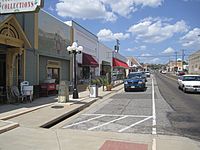 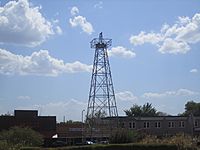 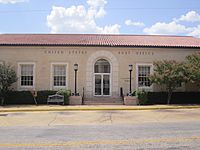 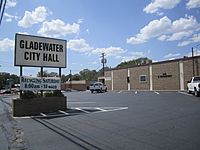 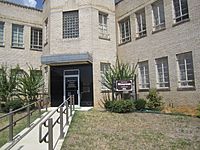 The East Texas Museum in Gladewater 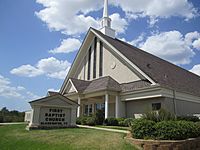 First Baptist Church of Gladewater is located on U.S. Highway 80.

Gladewater is a city in Gregg and Upshur counties in the U.S. state of Texas. The population was 6,441 at the 2010 census. U.S. Route 80 traverses the city.

The town is probably most famous as a base during Elvis Presley's early career, and also as the town in which Johnny Cash wrote "I Walk the Line". In the early 20th century, Gladewater was an oil boom town. Gladewater is known as the "Antique Capital of East Texas" with its Main Street downtown antique district.

Gladewater was founded by the Texas and Pacific Railway Company in 1873 on land bought from Jarrett Dean and Anderson White. A community called St. Clair, 2 miles (3 km) to the east, moved to Gladewater when the railroad announced that the only mail stop in the area would be there; residents from Point Pleasant, also bypassed by the railroad, moved to Gladewater. The first post office at Gladewater was established on August 22, 1873. The town's name probably originated from its proximity to Glade Creek, a tributary of the Sabine River that rose in a rather barren region called the Glades.

In 1874 Gladewater was incorporated with a mayor-alderman government. The incorporation lapsed, and a new charter was not obtained until 1931, when an influx of population necessitated organized city government. In 1955 Gladewater adopted a council-mayor form of government. The population grew slowly during the nineteenth century; the town had only 163 people in 1880 and 259 in 1900. In the area around Gladewater lumbering was a major activity, although farming was also important; cotton was the major crop. In 1908 the town had ten stores, one bank, two blacksmith shops, two hotels, a gin, a sawmill, and a planing mill. It continued to grow slowly until 1931.

On April 7, 1931, the first Gladewater oil well blew in. It was located one mile (1.6 km) outside town in the Sabine River bottom. Oil production led to a population increase during the 1930s from about 500 to around 8,000 people. In 1940, after the oil boom, Gladewater had a population of 4,454. Civic improvements in the 1940s included an extensive paving project and a commercial airfield. Between 1940 and 1960 the population grew to 5,742. Lake Gladewater, constructed on Glade Creek in 1954, provides recreation for city residents.

During the 1970s Gladewater moved from an oil-oriented to a more diversified economy, primarily because of depletion of oil resources in the area. The movement of salt water into the western edge of the large East Texas Oil Field affected Gladewater first. By 1980 the town had a total of 6,548 residents, 4,311 in Gregg County and 2,237 in Upshur County. The economy in the 1980s depended on the oil industry and related activities and on the manufacture of such products as furniture, clothing, paper products, and boats. The lumber industry is also important, as is agriculture. By 1990 the community had become well known for its numerous antique stores. Important annual festivals include the East Texas Gusher Days in April, the Gladewater Roundup Rodeo in June, the Arts and Crafts Festival in September, and Christmas in November. Gladewater is seen as an important antiques hub and has earned the slogan "Antique Capital of East Texas".

There were 2,257 households out of which 31.5% had children under the age of 18 living with them, 51.6% were married couples living together, 15.4% had a female householder with no husband present, and 29.4% were non-families. 26.1% of all households were made up of individuals and 12.6% had someone living alone who was 65 years of age or older. The average household size was 2.55 and the average family size was 3.06.

Gladewater is featured in the Michelle Shocked song "(Making the Run to) Gladewater" on her album Short Sharp Shocked. The Gladewater Highway is referenced in the Wayne Hancock song "Juke Joint Jumping".

The climate in this area is characterized by hot, humid summers and generally mild to cool winters. According to the Köppen Climate Classification system, Gladewater has a humid subtropical climate, abbreviated "Cfa" on climate maps.

All content from Kiddle encyclopedia articles (including the article images and facts) can be freely used under Attribution-ShareAlike license, unless stated otherwise. Cite this article:
Gladewater, Texas Facts for Kids. Kiddle Encyclopedia.