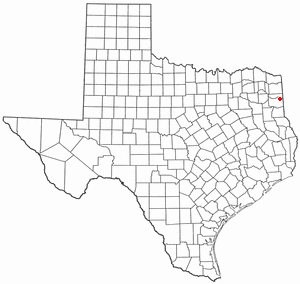 Karnack is a rural unincorporated community in northeastern Harrison County near Caddo Lake in the eastern region of the U.S. state of Texas.

The town is named after Karnak, Egypt (near modern-day Luxor). It was thought that the community's alignment with the city of Port Caddo was relative to that of Karnack and Thebes.

Former First Lady of the United States Lady Bird Johnson was born and reared in Karnack. 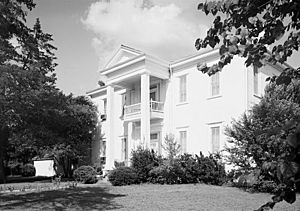 Karnack is situated on the shores of Caddo Lake, the only natural lake in the state of Texas. The lake is a bayou, known for its beautiful scenery and great fishing. The community of Karnack is deep in the pine woods of Northeast Texas and is mostly farm and timber land.

According to the Handbook of Texas, Caddo Lake was one of the largest natural lakes in Texas before the construction of Caddo Dam. It is known as Texas' only natural lake, though small natural lakes abound throughout much of Texas.

The climate in this area is characterized by hot, humid summers and generally mild to cool winters. According to the Köppen Climate Classification system, Karnack has a humid subtropical climate, abbreviated "Cfa" on climate maps.

All content from Kiddle encyclopedia articles (including the article images and facts) can be freely used under Attribution-ShareAlike license, unless stated otherwise. Cite this article:
Karnack, Texas Facts for Kids. Kiddle Encyclopedia.