Joinerville is an unincorporated community in East Texas. It is located in western Rusk County, Texas, United States. 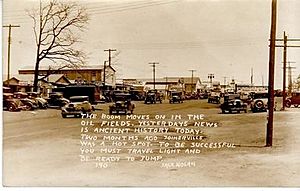 Joinerville, Texas, during the oil boom of the 1930s

Joinerville is seven miles west of the City of Henderson, Texas. It was originally called Cyril, and then Miller or Miller Schoolhouse until 1930, when the name was officially changed to "Joinerville" to honor a prominent oilman who discovered the world's largest oilfield (the East Texas Oil Field) just a couple of miles away. The community is also located near the site of a former Cherokee Indian village.

During the oil-boom years that followed 1930, men and families flocked to East Texas to find work in the oilfields and Joinerville's population shot up to 1,500. During the 1930s, the community that had been nothing more than a sleepy farm town, now had thirty-five businesses and a brand new post office (established in 1931 with Esther L. Berry as the first postmistress).

However, by 1940, new oil production had already peaked and the town's population quickly dropped to just 500. Over the decade that followed, the number of residents continued its downward spiral to 350 and the number of reported businesses dropped to just four. After a slight upswing during the 1950s and 1960s, the population again fell greatly. From 1980 through 2000, Joinerville reported just 140 residents and four businesses.

By 1950, while the existing oil wells continued to pump 20 years after discovery of the oilfield (many still pumping to this day), the need to drill new wells had long passed. With work drying up, most of the families who had lived and worked side-by-side for more than a decade left Joinerville.

Over the span of 20 years, Joinerville had exploded from nothing more than a speck on the map, to a boom-town, and back. Most all of the old buildings from its heyday are long gone and all that remains are pastures and memories of a time when Joinerville mattered, not just to Texas but, because of World War II, the world. Oil was needed in large quantities to support the war effort and East Texas could produce it.

The Gaston School was built in 1925, as a result of a merger between two existing schools - Miller and Mount Hope. Irene Gaston, a teacher at the Mount Hope school, donated the land on which the new school was built, and it was named Gaston after Irene and her husband Hugh.

The school was originally built to house 80 pupils. Following the discovery of oil and the expansion of Cyril, it was considerably expanded. In 1932, the Henderson Daily News referred to it as "the largest rural school in the world". The rebuilt school featured ten buildings, expansive sports facilities, and striking walls of native rock surrounding the campus.

On Friday, January 28, 1955, Elvis Presley performed at the Gaston School Auditorium. The show was sponsored by the High School Band and the Band Parents Booster Club, and earned $95 for the band's summer trip.

The school merged with New London in 1965 to form the West Rusk County Consolidated Independent School District, and the school buildings are no longer in use, although they are still standing. 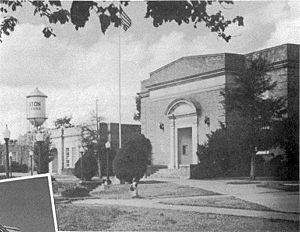 Gaston School Auditorium in the 1950s

In about 1930, the community of Cyril was renamed "Joinerville" to honor Columbus Marion "Dad" Joiner, an American oilman. In 1930, With A.D. ("Doc") Lloyd, a self-educated, self-proclaimed geologist, he discovered the largest oil field in the world up to that time, the East Texas Oilfield, just outside Joinerville, in western Rusk County, Texas.

When he was just 5 years old, his father, a soldier in the Confederate Army, was killed at the Battle of Jackson, Mississippi.

He later moved to Tennessee, and at age 23, Joiner established a law practice there. He was elected to the Tennessee state legislature, serving from 1889 to 1891.

He subsequently moved to the Ardmore, Oklahoma area in 1897 in search of inexpensive land. By 1906, he had purchased 12,000 acres of farmland. However, due to some dubious business decisions, he lost his land during the Panic of 1907. He then sought to reverse his losses in the Oklahoma oilfields as a wildcatter and drilled the first of about 100 wells in Seminole, Oklahoma, in 1913.

In 1926, at the age of 66, Joiner decided to move south, to Texas, believing there was oil in Rusk County, though geologists advised him otherwise. In the summer of 1927, Joiner, now 67 years old, took mineral leases on several thousand acres of Texas land, intending to sell certificates of interest. As part of that, he leased the 975-acre farm of widow, Daisy Bradford, near Joinerville.

Joiner and his, driller Tom M. Jones, spudded the Bradford No. 1 on an 80-acre tract belonging to Bradford in the Juan Ximines Survey of Rusk County. After drilling for six months with no oil findings, the hole was lost to a stuck pipe, at about 1,098 feet.

Joiner abandoned the well, and then on April 14, 1928, he formed another syndicate from another lease block of 500 acres and sold certificates of interest. This financed his second well, known as the Bradford No. 2, spudded by Joiner and driller Bill Osborne, 100 feet northwest of the No. 1.

Joiner's certificates again were bartered for supplies and labor, openly accepted as a medium of exchange in the poor Rusk County economy. After eleven months of intermittent drilling, the Bradford No. 2 reached a depth of 2,518 feet at which point the drill pipe twisted off and blocked the hole.

Some people claimed - perhaps with good reason - that Joiner was an old con artist and that his flimsy drilling equipment (consisting mostly of rusty pipes and a sawmill boiler for power) was merely a prop to scam investors.

Daisy Bradford #3: 1930 photo showing "Dad" Joiner (third from left) shaking hands with Dr. A.D. Lloyd in front of the well. Third from right is oilman H.L. Hunt, who bought out Joiner and became one of the richest men in the world. #3 is still producing oil today.

The Daisy Bradford No. 3

On September 5, 1930, Joiner and his team made history. Up to this point, no one was yet aware that the largest oilfield in the world was sitting, untouched, in East Texas, right under Joiner's feet. His third well, the "Daisy Bradford No. 3", struck "black gold" in the Woodbine sand at 3592 feet on a drill stem test. The initial production was 300 barrels per day and the well was completed on October 5, 1930.

The well is located on CR 4136, on the west side of Miller Lake, and is accessible from Texas Highway 64 to the south. Today, the site has a historical marker and the original well is located about 100 feet from the marker off the road. It continues to pump oil to this day.

Not long after he brought-in the Daisy Bradford #3, Joiner was in legal trouble for grossly overselling shares in his venture. Just two months after striking it big he went into receivership and was forced to sell his holdings to Haroldson L. "H.L" Hunt, of Hunt Oil, for $1.34 million. After 1940, Joiner retired to Dallas, to live out his days.

Columbus Joiner was nicknamed "Dad" because he was the “father” of the giant East Texas Oilfield, and because of his age, 70 years old.

Many people became very rich from Joiner's discovery (including Hunt) but Joiner was not one of them. At his death his assets were listed as "of nominal value". Joiner died penniless on March 27, 1947.

Located in Joinerville, Texas, the Gaston Museum presents life in the East Texas Oil Field from the 1930s through 1960's. The museum's exhibit building, designed by Charles Croft, was dedicated and occupied in June, 2005. With the only known surviving Tent House, museum visitors may truly step back in time and see how people lived during the 1930 oil boom.

The Gaston Museum is located approximately 6 miles West of Henderson, Texas on Highway 64. The museum is only open for limited hours on Thursday, Friday and Saturday, and is open by appointment only in December and January. Contact the museum to schedule a visit during times when the museum is normally closed.

The East Texas Oil Field's discovery well, The Daisy Bradford #3, is located 2.2 miles from the museum.

All content from Kiddle encyclopedia articles (including the article images and facts) can be freely used under Attribution-ShareAlike license, unless stated otherwise. Cite this article:
Joinerville, Texas Facts for Kids. Kiddle Encyclopedia.