Ardmore is the county seat of Carter County, Oklahoma, United States. According to the 2010 census, the city had a population of 24,283, with an estimated population of 24,698 in 2019. The Ardmore micropolitan statistical area had an estimated population of 48,491 in 2013. Ardmore is 90 miles (140 km) from both Oklahoma City and Dallas/Fort Worth, Texas, at the junction of Interstate 35 and U.S. Highway 70, and is generally considered the hub of the 13-county region of South Central Oklahoma, also known by state tourism pamphlets as "Chickasaw Country" and previously "Lake and Trail Country". It is also a part of the Texoma region. Ardmore is situated about 9 miles (14 km) south of the Arbuckle Mountains and is located at the eastern margin of the Healdton Basin, one of the most oil-rich regions of the United States.

Ardmore was named after the affluent Philadelphia suburb and historic PRR Main Line stop of Ardmore, Pennsylvania, which was named after Ardmore in County Waterford, Ireland, by the Pennsylvania Railroad in 1873. The name "Ardmore" is Irish for high grounds or hills.[citation needed] 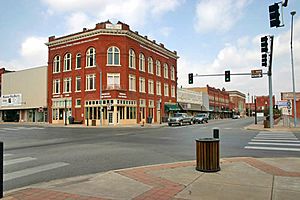 Ardmore, Indian Territory, began with a plowed ditch for a Main Street in the summer of 1887 in Pickens County, Chickasaw Nation. It owes much of its existence to the construction of the Santa Fe Railroad through the area during that time. It grew, as most frontier towns grew, over the years into a trading outpost for the region. In 1894, notorious outlaw William M. Dalton was gunned down by a posse as he tried to flee from his home in Ardmore. A large fire in 1895 destroyed much of the fledgling town, which forced residents to rebuild nearly the entire town. In the early 1900s, Ardmore became well known for its abundance of cotton-growing fields and eventually became known as the world's largest inland cotton port.

After the fields were stripped of their fertility, however, the city found itself positioned next to one of the largest oil fields ever produced in Oklahoma, the Healdton Oil Field. After its discovery in 1913, entrepreneurs and wildcatters flooded the area, and Carter County quickly became the largest oil-producing county in Oklahoma, and has remained so ever since. Ardmore has remained an energy center for the region ever since, with the region's natural wealth giving birth to such energy giants as Halliburton and the Noble Energy companies, among others. Ardmore also learned the perils of being energy-rich with yet another disaster in 1915, when a railroad car containing casing gas exploded, killing 45 people and destroying much of downtown, including areas rebuilt after the 1895 fire. The disaster, which made national news, gave residents the resolve to establish the city's first fire department to ensure that such events would not recur in the future. The city has not experienced any major setbacks since the 1915 fire, save a 1995 tornado that nearly destroyed the Uniroyal Goodrich (now Michelin) tire plant in west Ardmore. Despite a shift at the plant working at the time, miraculously no one was killed as the tornado ripped through the area, due to the public being alerted by area news and tornado sirens. On April 22, 1966, Ardmore was the site of the worst plane crash in Oklahoma history, which took lives of 83 people.

Ardmore became nationally famous in 2003 when 52 Democratic members of the Texas House of Representatives, known as the Killer Ds, left Texas for Ardmore to deny the Republican-controlled House a quorum when Republicans attempted to pass a redistricting plan for U.S. congressional districts. Redistricting of congressional seats is traditionally done following the decennial U.S. census; the 2003 plan, which had been engineered by U.S. Representative Tom DeLay (R-Texas), would have been an unprecedented second redistricting in the same decade, and was promoted as a way to increase Republican electoral success. By leaving the state to stay in an Oklahoma hotel, Democrats temporarily delayed passage of the redistricting plan the Republican-controlled House. Republicans eventually succeeded at the re-redistricting, although in 2006, the U.S. Supreme Court ruled that new borders of the 25th Congressional District, a long thin chain of counties from Austin to Mexico, dubbed the "Fajita Strip", was in violation of the Voting Rights Act of 1965, since it divided up predominantly Hispanic areas into multiple districts, and a U.S. district judge ordered new boundaries favorable to incumbent Democrats Ciro Rodriguez and Lloyd Doggett to be drawn.

Ardmore is located about 10 miles (16 km) south of the Arbuckle Mountains, an ancient, eroded range spanning some 62 mi (100 km) across southern Oklahoma. The geology is highly variegated within the area, with uplifted and folded ridges visible within the shoreline of some of the lakes surrounding Ardmore. The city of Ardmore has no intracity streams or rivers, but is part of the Washita and Red River watersheds, with two tributaries, Caddo and Hickory creeks, flanking the broad, low area in which Ardmore is situated. Ardmore is also 3.1 mi (5 km) north of Lake Murray, an impoundment of the two arms of Anadarche Creek, which eventually flows into the western reaches of Lake Texoma. 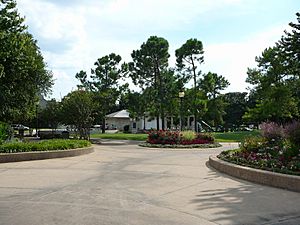 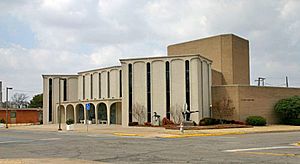 Charles B. Goddard Center for the Visual and Performing Arts, downtown Ardmore

Being home to many pioneers in the dawn of the American oil industry, Ardmore has been blessed with riches far beyond most cities of its size, as well as the colorful past that often accompanies such "instant" wealth. The wealth has been channeled into many philanthropical endeavors, as well as reinvested into the area in various art and infrastructure endowments.

The Ardmore Masonic Lodge is one of the oldest civic organizations in Ardmore.

Historic Santa Fe Rail Station and adjacent track yard. This facility serves as the Amtrak station for Ardmore on the Heartland Flyer route.

Interstate 35 passes through the western side of Ardmore, as it traverses the United States from Duluth, Minnesota, to Laredo, Texas.

Ardmore has four exits off I-35:

Ardmore has two general aviation airports, Ardmore Downtown Executive Airport and Ardmore Municipal Airport. In the early 1950s, commercial air transportation was provided to the Municipal Airport by Central Airlines. Currently, the nearest scheduled air service is available at Will Rogers World Airport in Oklahoma City and Dallas/Fort Worth International Airport, 99 miles (159 km) north and 95 miles (153 km) south of Ardmore, respectively. Ardmore is linked by rail with the DFW Airport via the Heartland Flyer to Trinity Railway Express connection.

Ardmore has one principal rail line, that being one of the Burlington Northern Santa Fe mainlines running from Fort Worth, Texas to Oklahoma City (also connecting with Kansas City and Chicago), being the route of the current Heartland Flyer passenger rail service. This line was formerly part of the Atchison, Topeka and Santa Fe rail network before the merger with Burlington Northern. The line dates back to 1887, and the first train arrived on July 28 in that year. The company has multiple parallel tracks (5+) running through central Ardmore (MP 450.5), added concomitantly with the rise of the trading status of the city and region throughout the early 1900s. There is also a lightly used transverse rail spur from the BNSF line to the Michelin tire plant in west Ardmore, mainly intended for the transport of raw materials to the factory. BNSF has given Site Certification to the Ameripointe Logistics Park in Ardmore, meaning the railroad has identified the location as an optimal rail-served site meeting ten economic development criteria, intended to minimize development risks customers may face.

The historic Santa Fe depot in downtown Ardmore is also a stop on Amtrak's Heartland Flyer train route, with daily service to and from Oklahoma City and Fort Worth.

Ardmore also has a scheduled stop on the Greyhound/Jefferson Bus Lines system.

In the early twentieth century, Ardmore had a fairly extensive traction (streetcar/interurban) railway system, franchised in February 1905, that linked outlying areas, such as the Dornick Hills Country Club, to the central business district. The main part of the streetcar line originally ran down the center lane of Main Street. Service ended in 1922.

The following are still present in Ardmore:

The NRHP-listed Choctaw, Oklahoma and Gulf Railroad Viaduct, previously in Ardmore, has been demolished. The Brady Cabin is given as 38 miles northwest of Ardmore.

Ardmore is the principal center of trade for a ten-county region in South Central Oklahoma, with a retail pull factor of 1.7–1.9. Ardmore's major employers are Michelin North America, with 1,900 employees, and Mercy Hospital Ardmore, with 900 employees. Several hundred employees work for regional distribution centers for Best Buy, Dollar Tree (Marietta) and Dollar General Stores, among others. Until early 2009, Ardmore was also home to a large regional distribution center for the now-defunct retail electronics chain Circuit City and was also home to a 1-800-flowers call center. In 2010 Ardmore lost another technology company, IMTEC, which was purchased by 3M and moved away to California. The 85,000 bbl/d (13,500 m3/d) Valero refinery in northeast Ardmore employs some 250 area residents. Ardmore is also home to the Samuel Roberts Noble Foundation, among the nation's 50 largest private foundations, primarily engaged in agricultural bioresearch activities. In 2001, East Jordan Iron Works opened a foundry located at the Ardmore Industrial Airpark. On September 24, 2020, Oklahoma Blood Institute opened one of the largest blood donation facilities in the state in Oklahoma .

Ardmore-Oak Hall Episcopal School is one of only three Episcopal diocesan schools in the state of Oklahoma .

CareerTech has a campus here.

All content from Kiddle encyclopedia articles (including the article images and facts) can be freely used under Attribution-ShareAlike license, unless stated otherwise. Cite this article:
Ardmore, Oklahoma Facts for Kids. Kiddle Encyclopedia.