Kids Encyclopedia Facts
This page is about the river in Texas and Oklahoma. For the river in Arkansas and Louisiana, see Ouachita River. 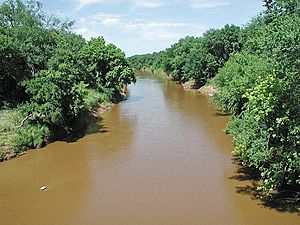 The Washita River at Anadarko, Oklahoma 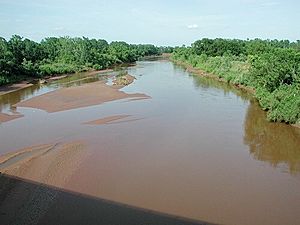 The Washita River forms in eastern Roberts County, Texas (35°38′N 100°36′W﻿ / ﻿35.633°N 100.600°W﻿ / 35.633; -100.600), near the town of Miami in the Texas Panhandle. The river crosses Hemphill County, Texas and enters Oklahoma in Roger Mills County. It cuts through the Oklahoma counties of Roger Mills, Custer, Washita, Caddo, Grady, Garvin, Murray, Carter, and Johnston before emptying into Lake Texoma, which is the modern border between Bryan County and Marshall County.

The river bisects the heart of the Anadarko Basin, the fifth-largest natural gas formation area in the United States. When the river reaches the Arbuckle Mountains, it drops 30 feet per mile (5.7 m/km) as it cuts through Big Canyon, a limestone gorge 300 feet (91 m) deep.

The Washita's river bed is made up of unstable mud and sand, and its banks are composed of steeply incised and erosive red earth. This makes it one of the most silt-laden streams in North America.

French explorers encountered the Washita River in the early 18th century while traveling upstream on the Red River and thought it was the same stream described by friendly Choctaw tribesmen as the Ouachita River. They soon found that it appeared very different from descriptions of the Ouachita, and named it the Faux Ouachita (False Ouachita). The name was later referred to by English-speaking American settlers as False Washita. After the American Civil War, Americans referred to the river as the Washita.

In 1842, General and future President Zachary Taylor established Fort Washita near the lower end of the river to protect resettled citizens of the Choctaw and Chickasaw nations, who had been removed from the Southeastern United States, from the Plains Indians inhabiting the area. The fort was about 19 miles (31 km) above the confluence of the Washita and Red rivers.

Capt. Wyllys Lyman's wagon train was besieged by Indians near the Washita in Hemphill County on September 9–14, 1874.

All content from Kiddle encyclopedia articles (including the article images and facts) can be freely used under Attribution-ShareAlike license, unless stated otherwise. Cite this article:
Washita River Facts for Kids. Kiddle Encyclopedia.