Murray County is a county located in the southern part of the U.S. state of Oklahoma. As of the 2010 census, the population was 13,488. This is a 6.9 percent increase from 12,623 at the 2000 census. The county seat is Sulphur. The county was named for William H. Murray, a member and president of the Oklahoma Constitutional Convention and later a Governor of Oklahoma.

The area now occupied by Murray County was part of the land granted to the Choctaw Nation by the Treaty of Dancing Rabbit Creek in 1820. The Chickasaw received part of the land under the Treaty of Doaksville in 1838. The area became part of the Chickasaw Nation in 1855. There was an extended conflict before the U.S. Civil War between the Plains Indians and the newly arrived Choctaws and Chickasaws. The U.S. Army built Fort Towson (1824); Fort Washita (1842) and Fort Arbuckle (1851) to protect the Chickasaws. After the conflict between the tribes was settled, various bands of outlaws moved in and continued to create law enforcement problems.

Sulphur began developing in the 1880s around the springs for which it was named. The springs encouraged the building of bathhouses and spas. Several were established by the time that a post office was established in 1898. The Sulphur Springs Railway (acquired by the St. Louis and San Francisco Railway in 1907) arrived there in 1902, and the 1904 establishment of Platt National Park, with headquarters at Sulphur, spurred the expansion of services for health-seekers. Other visitors were drawn to the park and to nearby Turner Falls, making Sulphur one of the state's earliest recreational centers.

Murray County was created when the Choctaw Nation was disestablished immediately before Oklahoma statehood. Sulphur was declared as the county seat.

According to the U.S. Census Bureau, the county has a total area of 425 square miles (1,100 km2), of which 416 square miles (1,080 km2) is land and 8.6 square miles (22 km2) (2.0%) is water. It is the third-smallest county in Oklahoma by land area and second-smallest by total area. The county's northern section lies in the Sandstone Hills physiographic region and is suitable for farming, while the southern portion is in the Arbuckle Mountains region, which is dominated by rolling hills and rock outcrops. The Washita River drains the county. Chickasaw National Recreation Area (CNRA) lies in the county. Lake of the Arbuckles, part of CNRA, was completed on Rock Creek in 1966. 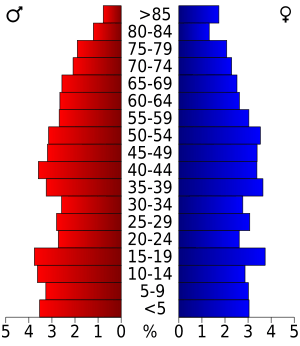 Age pyramid for Murray County, Oklahoma, based on census 2000 data.

All content from Kiddle encyclopedia articles (including the article images and facts) can be freely used under Attribution-ShareAlike license, unless stated otherwise. Cite this article:
Murray County, Oklahoma Facts for Kids. Kiddle Encyclopedia.