Sulphur is a city in and county seat of Murray County, Oklahoma, United States. The population was 4,929 at the 2010 census, a 3.4 percent gain from 4,794 at the 2000 census. The area around Sulphur has been noted for its mineral springs, since well before the city was founded late in the 19th Century. The city received its name from the presence of sulfur in the water.

This area was part of the Chickasaw Nation in Indian Territory during the late 19th Century. The first known settler was Noah Lael, son-in-law of former Chickasaw Governor Cyrus Harris, who built a ranch south of Pavilion Springs in 1878. In 1882, Harris sold the ranch to Perry Froman, a part Chickasaw rancher. The Encyclopedia of Oklahoma History and Culture says the ranch house was the first residence in Sulphur.

About 1890, a group of fisherman built a clubhouse at the Sulphur site. Conventions and other gatherings began meeting in the vicinity during the early 1890s. The clubhouse owners enlarged the building and sold it for use as a hotel. Richard A. Sneed, a lawyer who visited the area about 1890 and soon after organized the Sulphur Springs Company. The company bought 600 acres (2.4 km2) of land from Froman Ranch and platted a townsite. A post office named Sulphur was established October 2, 1895. The Sulphur Headlight, the first newspaper in town, began publication in 1899, and the first telephone exchange in town went into service in 1900.

In 1902, the Sulphur Springs Railroad (SSR) was constructed from Sulphur to Scullin, a distance of 6 miles (9.7 km), where it connected to the newly completed St. Louis and San Francisco Railway (Frisco). The Frisco bought the SSR in 1907.

In 1902, the U. S. Government and the Chickasaw Nation agreed to preserve the area around the hot springs, and called it the The Sulphur Springs Reservation, later renaming it as Platt National Park. People and buildings were required to move out of the reservation area. The people resettled nearby, creating two communities, West Sulphur and East Sulphur, divided by Rock Creek. Another such move occurred in 1904, when the U.S, government decided to add another 200 acres (0.81 km2) to the new park. The reservation officially opened to the public on April 29, 1904. Platt National Park was abolished by Congress and made part of the much larger Chickasaw National Recreation Area (CNRA) in 1976, which included Lake of the Arbuckles.

Sulphur defeated Davis, Oklahoma in an election in 1908 to determine the location of the county seat of the newly created Murray County. 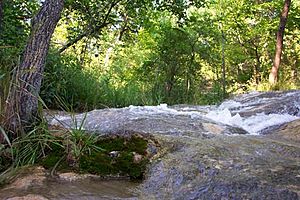 Travertine Creek, in the Chickasaw National Recreation Area, located in the foothills of the Arbuckles near Sulphur.

Chickasaw National Recreation Area (originally Platt National Park), a popular destination for many regional tourists, is located just east of the town of Sulphur. Among the smallest parks in the National Park System, Chickasaw N.R.A. averages 3–4 million visitors per year . Principal attractions in Sulphur besides the park are sulfurous water springs in town that were once thought to cure ailments and other medical conditions. The pungent odor and taste are quite popular with some people. Other attractions include the Arbuckle Mountain range, just to the southwest, complete with many hiking and recreational opportunities.

Sulphur is also the home to the newly finished Chickasaw Cultural Center, a museum which tells the story of the Chickasaw Nation.

Vendome Well remains the state's largest artesian spring. Its sulfur water fed a stream that converged with Travertine Creek and formed a small lake. People smeared the lake's mud on their bodies to cure ailments.

All content from Kiddle encyclopedia articles (including the article images and facts) can be freely used under Attribution-ShareAlike license, unless stated otherwise. Cite this article:
Sulphur, Oklahoma Facts for Kids. Kiddle Encyclopedia.