The Chickasaw Nation (Chickasaw: Chikashsha I̠yaakni) is a federally recognized Native American tribe, with its headquarters located in Ada, Oklahoma in the United States. They are an Indigenous people of the Southeastern Woodlands, originally from northern Mississippi, northernwestern Alabama, southwestern Kentucky, and western Tennessee. Today, the Chickasaw Nation is the 13th largest tribe in the United States.

Currently, the nation's jurisdictional territory and reservation includes about 7,648 square miles of south-central Oklahoma, including Bryan, Carter, Coal, Garvin, Grady, Jefferson, Johnston, Love, McClain, Marshall, Murray, Pontotoc, and Stephens counties. These counties are separated into four districts, the Pontotoc, Pickens, Tishomingo, and Panola, with relatively equal populations. Their population today is estimated to be 38,000, with the majority residing in the state of Oklahoma.

In the 17th and 18th centuries, European Americans considered the Chickasaw as one of the historic Five Civilized Tribes, along with the Cherokee, Choctaw, Muscogee, and Seminole nations, due their agrarian culture and later adoption of centralized governments with written constitutions, intermarriages with the white settlers, literacy, Christianity, market participation, and slave holding.

The Chickasaw language, Chikashshanompa’, belongs to the Muskogean language family. This is primarily an oral language, with no historic written component. A significant part of their culture is passed on to each generation through their oral history, consisting of intergenerational stories that speak to the tribe’s legacy and close relationship with the Choctaw. The similarities in the language of the Chickasaw and the Choctaw have prompted anthropologists to propose a number of theories regarding the origins of the Chickasaw Nation as it continues to remain uncertain.

Clans within the Chickasaw Nation are separated into two moieties: the Impsaktea and the Intcutwalipa, with each clan having their own leaders. Their tradition of matrilineal descent provides the basic societal structure of the nation, with children becoming members and under the care of their mother’s clan.

Hernando de Soto is credited as being the first European to contact the Chickasaw, during his travels of 1540. He discovered them to have an agrarian society with a sophisticated governmental system, complete with their own laws and religion. They lived in towns.

In 1797, a general appraisal of the tribe and its territorial bounds was made by Abraham Bishop of New Haven, who wrote:

The Chickasaw remained in their homelands of western Tennessee and northern Mississippi until the 1830s. After decades of increasing pressure to cede their land from the Federal and state governments, the Chickasaw finally agreed to cede their remaining Mississippi Homeland in the Treaty of Pontotoc Creek and relocate west to Indian Territory. 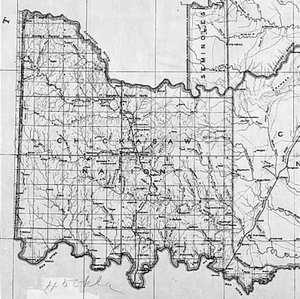 During Indian removal of the 1830s, the United States government first assigned the Chickasaw to a part of Indian Territory west of the Mississippi River controlled by the Choctaw Nation; their area in the western area of the nation was called the Chickasaw District. It consisted of Panola, Wichita, Caddo, and Perry counties.

Although originally the western boundary of the Choctaw Nation extended to the 100th meridian, virtually no Chickasaw lived west of the Cross Timbers, due to continual raiding by the Plains Indians of the southern region. The United States eventually leased the area between the 100th and 98th meridians for the use of the Plains tribes. The area was referred to as the "Leased District".".

The division of the Choctaw Nation was ratified by the Choctaw–Chickasaw Treaty of 1854. The Chickasaw constitution establishing the nation as separate from the Choctaws, was signed August 30, 1856, in the new capitol of Tishomingo (now Tishomingo, Oklahoma). The first Chickasaw governor was Cyrus Harris. The nation consisted of five divisions; Tishomingo County, Pontotoc County, Pickens County, and Ponola County. Law enforcement was by the Chickasaw Lighthorsemen, although non-Indians fell under the jurisdiction of the Federal court at Fort Smith.

Following the Civil War, the United States forced the Chickasaw into new peace treaties because of the support of many of the Five Civilized Tribes for the Confederacy. Under the new treaty, the Chickasaw (and Choctaw) ceded the "Leased District" to the United States. In 1868, the Chickasaw Montford T. Johnson, with Jesse Chisholm's help, secured an agreement with the Plains tribes to establish a ranch on the new western edge of the Nation. His ranch was never raided, although often threatened. He and his family remained the only permanent residents of the area until the settlement of Oklahoma after it was admitted as a state.

Under the Dawes Act, the Chickasaw nation was dissolved, with government functions transferred to the federal government before statehood, by agreement negotiated with the Dawes Commission. Following the breakup of the nation, the Chickasaw became citizens of the United States. The US allotted the communal land in plots for individual households of registered members. Land left over was declared "surplus" and made available for sale to non-Indians, so they lost much of their tribal lands.

In the second half of the 20th century, the Chickasaw reorganized their tribal government. They adopted a new constitution on August 27, 1983 to manage their business affairs.

All content from Kiddle encyclopedia articles (including the article images and facts) can be freely used under Attribution-ShareAlike license, unless stated otherwise. Cite this article:
Chickasaw Nation Facts for Kids. Kiddle Encyclopedia.