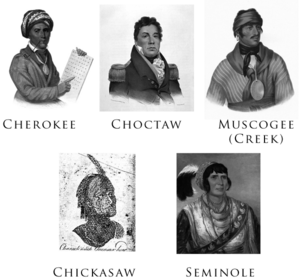 Gallery of the Five Civilized Tribes. The portraits were drawn/painted between 1775 and 1850.

The Five Civilized Tribes is the term applied to five Native American nations, the Cherokee, Chickasaw, Choctaw, Creek, and Seminole, considered civilized by white settlers during that time period because they adopted many of the colonists' customs and had generally good relations with their neighbors.

All content from Kiddle encyclopedia articles (including the article images and facts) can be freely used under Attribution-ShareAlike license, unless stated otherwise. Cite this article:
Five Civilized Tribes Facts for Kids. Kiddle Encyclopedia.