Ada is a city in and the county seat of Pontotoc County, Oklahoma, United States. The population was 16,481 at the 2020 United States Census. The city was named for Ada Reed, the daughter of an early settler, and was incorporated in 1901. Ada is home to East Central University, and is the headquarters of the Chickasaw Nation. Ada is an Oklahoma Main Street City, an Oklahoma Certified City, and a Tree City USA member.

In the late 1880s, the Daggs family (by way of Texas) became the first white family to settle what is now known as Ada, which was formerly known as Daggs Prairie. In April 1889, Jeff Reed (a native Texan, and relative of the Daggs family) was appointed to carry the mail from Stonewall to Center (which was later combined with Pickett), two small communities in then Indian Territory. With his family and his stock, he sought a place for a home on a prairie midway between the two points, where he constructed a log house and started Reed's Store. Other settlers soon built homes nearby. In 1891, a post office was established and named after Reed's oldest daughter, Ada. Ada incorporated as a city in 1901 and grew rapidly with the arrival of the St. Louis and San Francisco Railway line. Within a decade the Santa Fe Railroad and the Oklahoma Central Railway also served the town.

In 1909, the women of Ada organized an effort to build a normal school in their city. It resulted in the founding of East Central College (now East Central University).

The first manufacturing company in Ada, the Portland Cement Company, installed the first cement clinker in Oklahoma in 1910. American Glass Casket Company began manufacturing glass caskets in 1916, but the business failed. Hazel Atlas Glass bought the plant in 1928 and produced glass products until 1991. 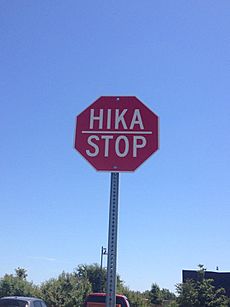 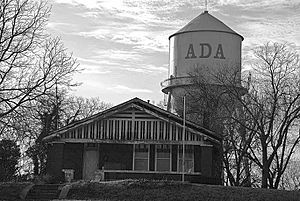 Picture taken on Broadway of the former Stout family residence with one of the city's water towers behind it. 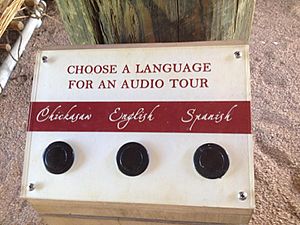 Language offerings for audio tours at the Chickasaw Cultural Center, including Chickasaw, English, and Spanish.

The following sites in Ada are listed on the National Register of Historic Places:

The economy of Ada is diversified. In the mid and late 20th century, the town was a manufacturing center, producing products such as Wrangler jeans, auto parts, cement and concrete, plasticware, and other products. Since the start of the 21st century, manufacturers have made major investments in expansions and new technology.

In 1975, the Chickasaw Nation opened its headquarters in Ada. Revenues for the Nation were over 12 billion dollars in 2011, most of which is funneled through Ada. The Robert S. Kerr Environmental Research Center, a large water research lab staffed by the Environmental Protection Agency, opened in 1966. LegalShield, a multi-level marketing provider of pre-paid legal services, is headquartered in the city. Oil and natural gas remain a part of the regional economy.

The largest employers in the region are: 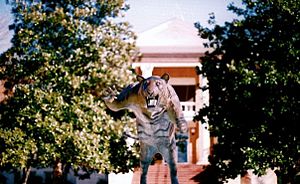 East Central University, located in Ada, is a public four-year institution that has been in operation since 1909. ECU serves roughly 4,500 students is known internationally for its cartography program, as only a few such programs exist. ECU is also home to an Environmental Health Science Program, one of only 30 programs nationally accredited by the National Environmental Health Science and Protection Accreditation Council (EHAC).

Rail Freight is serviced by BNSF

The Ada Regional Airport (FAA Identifier: ADH), owned and operated by the City of Ada, is located two miles north of downtown, and is home to two major aeronautical industries—General Aviation Modifications, Inc. and Tornado Alley Turbo. From the early 1950s well into the 1960s, the airport was served by Central Airlines.

All content from Kiddle encyclopedia articles (including the article images and facts) can be freely used under Attribution-ShareAlike license, unless stated otherwise. Cite this article:
Ada, Oklahoma Facts for Kids. Kiddle Encyclopedia.