Tishomingo is the largest city in, and the county seat of, Johnston County, Oklahoma, United States. The population was 3,034 at the 2010 census, a decline of 4.1 percent from the figure of 3,162 in 2000. It was the first capital of the Chickasaw Nation, from 1856 until Oklahoma statehood in 1907. The city is home to Murray State College, a community college with an annual enrollment of 3,015 students. Tishomingo is part of the Texoma region.

Before the founding of Tishomingo in 1852, the area was known as Good Springs, named for the presence of several springs that made the place a suitable camp site along the road between Fort Washita and Fort Arbuckle. The small town had replaced the old campsites with permanent structures and renamed Tishomingo by 1856. It was designated as the Chickasaw capital in 1856. A post office was established in 1857.

The Chickasaw capitol building was built in 1897 from local red granite and officially dedicated in 1898. It housed the tribal governor, the bicameral legislature and other government officials and clerks. The territorial court also met there from time to time. The territorial government was dissolved at statehood. In 1910, the building was sold to Johnston County, becoming the county court house.

The Western Oklahoma Railroad was built from Haileyville to Ardmore via Tishomingo in 1902, and bought by the Chicago, Rock Island and Pacific Railway in the same year. It was abandoned in 1938.

Tishomingo is home of the Texhoma Oil and Refining Company, established in the 1920s by the industrialist Joseph A. Kemp of Wichita Falls, Texas. 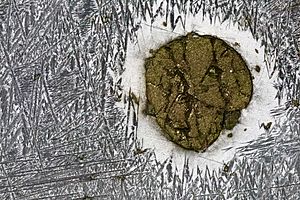 The Tishomingo Iron Meteorite, found in 1965

All content from Kiddle encyclopedia articles (including the article images and facts) can be freely used under Attribution-ShareAlike license, unless stated otherwise. Cite this article:
Tishomingo, Oklahoma Facts for Kids. Kiddle Encyclopedia.