Johnston County is a county located in the U.S. state of Oklahoma. As of the 2010 census, the population was 10,957. Its county seat is Tishomingo. It was established at statehood on November 16, 1907 and named for Douglas H. Johnston, a governor of the Chickasaw Nation.

Johnston County is part of the Texoma Region.

Several educational institutions were established in the Chickasaw Nation before the Civil War. The Pleasant Grove Mission School and the Chickasaw Academy were founded by the Methodist Episcopal Church in 1844. The Presbyterians, in partnership with the Chickasaw Nation, opened the Wapanucka Female Manual Labour School in 1852.

The Chickasaw government joined the Confederate States of America after the outbreak of the Civil War. The Union army ordered its troops to evacuate Fort Washita, Fort Cobb and Fort Arbuckle. When Confederate troops occupied the area, they used the stone building at Wapanucka as a hospital and a prison.

Several railroads built tracks through this area about the turn of the 20th century. In 1900–1901 the St. Louis, Oklahoma and Southern Railway, which the St. Louis and San Francisco Railroad (Frisco) purchased in June 1901, laid tracks north-south through the area. In 1902, the Western Oklahoma Railroad, which became the Choctaw, Oklahoma and Gulf Railroad (CO&G), built a line southwest to northeast through the present county. In 1908 – 1910 the Missouri, Oklahoma and Gulf Railway (MO&G), (acquired by the Kansas, Oklahoma and Gulf Railway in 1919,) laid a north-south line in the far eastern portion of Johnston County. In 1911, the MO&G built a spur west to Bromide, an early-twentieth-century health resort, capitalizing on the vicinity's natural springs. Now the Burlington Northern and Santa Fe, which acquired the Frisco in 1980, is the only railroad left in the county. 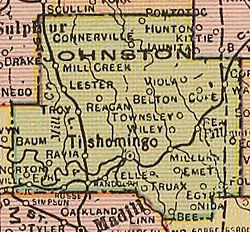 All content from Kiddle encyclopedia articles (including the article images and facts) can be freely used under Attribution-ShareAlike license, unless stated otherwise. Cite this article:
Johnston County, Oklahoma Facts for Kids. Kiddle Encyclopedia.