Kids Encyclopedia Facts
Not to be confused with Marshall, Oklahoma.

Marshall County is a county located on the south central border of Oklahoma. As of the 2010 census, the population was 15,840. Its county seat is Madill. The county was created at statehood in 1907 from the former Pickens County of the Chickasaw Nation. It was named to honor the maiden name of the mother of George Henshaw, a member of the 1906 Oklahoma Constitutional Convention. The county and its cities are part of the Texoma region.

The area covered by Marshall County was part of the territory set aside by the U.S. government for resettlement of the Choctaw tribe and the closely related Chickasaw tribe from their lands in the southeastern United States. The Chickasaws began relocating to this area in 1837. The U.S. Army built Fort Washita in 1842 to protect the new arrivals from raids by other tribes. In 1857, the Chickasaw Nation formally separated from the Choctaw Nation. This area became part of Pickens County in the Chickasaw Nation.

Railroads came to the present-day Marshall County in 1901, when the St. Louis, Oklahoma and Southern Railway (acquired shortly after by the St. Louis and San Francisco Railway), known as the Frisco, constructed a north-south line. The following year, the St. Louis, San Francisco and New Orleans Railroad (formerly the Arkansas and Choctaw Railway) laid tracks from east to west through the area. This line was sold to the Frisco in 1907. The State of Oklahoma relocated part of this line in 1941 to make way for the creation of Lake Texoma. 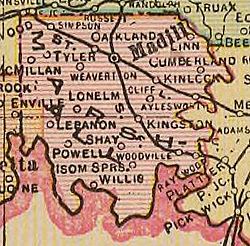 All content from Kiddle encyclopedia articles (including the article images and facts) can be freely used under Attribution-ShareAlike license, unless stated otherwise. Cite this article:
Marshall County, Oklahoma Facts for Kids. Kiddle Encyclopedia.