Love County is a county located on the southern border of the U.S. state of Oklahoma. As of the 2010 census, the population was 9,423. Its county seat is Marietta. The county was created at statehood in 1907 and named for Overton Love, a prominent Chickasaw farmer, entrepreneur and politician.

Love County is a part of the Texoma region.

The Louisiana Purchase, effected in 1803, included all of the present state of Oklahoma except the Panhandle. Explorers and traders began travelling extensively through the area, intending to find trade routes to Santa Fe. The Quapaw were the principal Native Americans living south of the Canadian River. The Quapaws ceded their land to the American government in 1818, and were replaced by the Choctaws in the early 1830s. The Chickasaws were assigned land in the middle of Choctaw territory during 1837-8.

Overton Love was one of the earliest Chickasaws who settled in present-day Love County. He was twenty years old when he arrived in Indian Territory from Mississippi in 1843. His settlement became known as Love's Valley (about 6 miles (9.7 km) east of the present town of Marietta). He later became one of the largest Chickasaw landowners and cattle raisers in the area, working 8,000 acres (3,200 ha) of Red River Bottomland.. Eventually, he became a member of both houses of the Chickasaw National Council, a county and district judge, and a member of the Dawes Commission.

Love County is within the Red River Plains physiographic region, with a rolling to hilly topography. The Red River and its tributaries Simon Creek, Walnut Bayou, Hickory Creek and Mud Creek drain the county. Lake Murray is on the northeastern border and Lake Texoma is on the southern border. 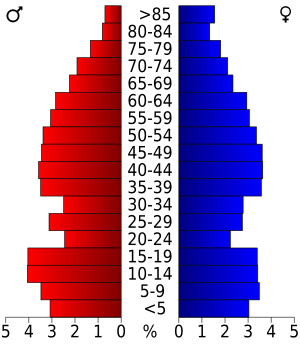 Age pyramid for Love County, Oklahoma, based on census 2000 data.

All content from Kiddle encyclopedia articles (including the article images and facts) can be freely used under Attribution-ShareAlike license, unless stated otherwise. Cite this article:
Love County, Oklahoma Facts for Kids. Kiddle Encyclopedia.