Kids Encyclopedia Facts
Not to be confused with Carter, Oklahoma.

Carter County is a county located in the U.S. state of Oklahoma. As of the 2010 census, the population was 47,557. Its county seat is Ardmore. The county was named for Captain Ben W. Carter, a Cherokee who lived among the Chickasaw.

Carter County is part of the Ardmore, OK Micropolitan Statistical Area. It is also a part of the Texoma region.

Prior to statehood, the present Carter County, Oklahoma, was part of Pickens County in the Chickasaw Nation of Indian Territory. After the Civil War, the government of the United States forced the Chickasaw government to allow railroads built across its territory. The Gulf, Colorado and Santa Fe Railway (controlled by the Atchison, Topeka and Santa Fe Railway, AT&SF) built a line north from Texas to Purcell.

In 1901-1903 the Arkansas and Choctaw Railway (acquired by the St. Louis and San Francisco Railway in 1907) built a line from Arkansas to Ardmore. Oil production spurred further railroad development. In 1913-14, the Oklahoma, New Mexico and Pacific Railway constructed a line from Ardmore west to Ringling. In 1916, the Ringling and Oil Fields Railway laid tracks north from Ringling Junction to Healdton. These last two rail lines were abandoned in 1976.

Oil and gas production began very early in the 20th Century. The Healdton field opened in 1913, and led to the development of Ardmore as a major oil production center. However, a disastrous fire occurred in Ardmore in 1915, when a railroad car exploded, killing 43 people and destroying much of the downtown. Ardmore and the local oil industry recovered, and the city also became a manufacturing center. Akron Tire and Rubber Company built and operated a plant in Ardmore as early as 1915. In 1970, Uniroyal built a tire plant there. It was acquires by Michelin North America in 1990. By the start of the 21st Century, manufacturing was the largest component of the county economy.

The county contains parts of several physiographic regions, including the Arbuckle Mountains, the Coastal Plains, the Red Bed plains and the Cross Timbers. The northern part of the county drains to the Washita River, while several creeks drain the southern part directly to the Red River.

The Healdton Field, encompassing Healdton and located in the western portion of Carter County, produces from the Pennsylvanian Healdton sands of the Hoxbar Group and the Ordovician massive carbonate Arbuckle Group. The field is located on the "Healdton uplift", a northwest-southeast trending anticline, which formed with the Wichita Orogeny, and is 8 miles long and up to 3 miles wide. This was followed by deposition of the Healdton sandstones and shales on pre-Pennsylvanian eroded rocks and subsequent folding during the Arbuckle Orogeny. A prospector named Palmer drilled a shallow well, 425 feet, near an oil seep in the 1890s but Federal Law prohibited oil development on "Indian lands" until the early 1900s. Therefore, the discovery of the field is credited to the drilling of No. 1 Wirt Franklin in 1913. 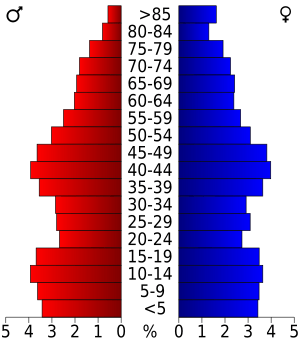 Age pyramid for Carter County, Oklahoma, based on census 2000 data.

All content from Kiddle encyclopedia articles (including the article images and facts) can be freely used under Attribution-ShareAlike license, unless stated otherwise. Cite this article:
Carter County, Oklahoma Facts for Kids. Kiddle Encyclopedia.