Kids Encyclopedia Facts
Not to be confused with Jefferson, Oklahoma.

Jefferson County is a county located in the U.S. state of Oklahoma. As of the 2010 census, the population was 6,472. Its county seat is Waurika. The county was created at statehood and named in honor of President Thomas Jefferson.

In the 1750s, the Taovaya Indians, a Wichita tribe, established twin villages along the Red River, in Jefferson County and across the river near present-day Spanish Fort, Texas. The village became “a lively emporium where Comanches brought Apache slaves, horses and mules to trade for French packs of powder, balls, knives, and textiles and for Taovaya-grown maize, melons, pumpkins, squash, and tobacco.”

In 1759, in response to the destruction of the San Saba Mission, the Spanish led an expedition against the Taovaya and their allies and attacked the twin villages. The Indians defeated the Spanish army. (See Battle of the Twin Villages) The Taovaya villages were abandoned before 1841 as the Taovaya had been decimated by smallpox and encroachment by other Indians and Anglo-Americans.

In the 1830s, the Choctaw tribe acquired more than two-thirds of the land now covered by Jefferson County, and the closely related Chickasaw tribe began to relocate there. In 1855, the two tribes formally divided and this area became part of the Chickasaw Nation. The western part of the present county became part of the Kiowa-Comanche-Apache Reservation, created by the 1867 Medicine Lodge Treaty. That area was opened to settlement by non-Indians by the Kiowa-Comanche-Apache Opening in 1901.

After the Civil War, the Chisholm Trail, which passed through this area, was heavily used to drive cattle from Texas to markets in Kansas. In 1892, the Chicago, Rock Island and Pacific Railway laid tracks along the trail route. The Enid and Anadarko Railway, sold to the Rock Island in 1903, built a line from Lawton to Waurika. The Wichita Falls and Oklahoma Railroad built the last railroad in the county in 1923, from Texas to Waurika. It went out of business in 1942. A railway line was built from Ardmore to Ringling.

Statehood in 1907 brought about the demise of the Chickasaw government and creation of Jefferson County. At that time the southeast corner of the county extended to Mud Creek including the communities of Belleville and Courtney. In 1924 the southeast corner of the county was realigned to its current boundary. The Oklahoma Constitutional Convention named Ryan as the county seat. An election for the seat was held in 1908 between Ryan, Sugden and Waurika, but none of the towns won a majority. Another election was held in 1912, resulting in Waurika being named as the county seat. 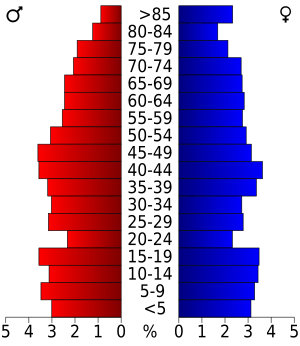 Age pyramid for Jefferson County, Oklahoma, based on census 2000 data.

All content from Kiddle encyclopedia articles (including the article images and facts) can be freely used under Attribution-ShareAlike license, unless stated otherwise. Cite this article:
Jefferson County, Oklahoma Facts for Kids. Kiddle Encyclopedia.