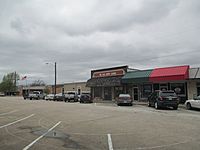 Clay County is a county located in the U.S. state of Texas. As of the 2010 census, its population was 10,752. The county seat is Henrietta. The county was founded in 1857 and later organized in 1860. It is named in honor of Henry Clay, famous American statesman, Kentucky Senator and United States Secretary of State.

Several railroads once served Clay County, including the Wichita Falls Railway, one of the properties of Joseph A. Kemp and his brother-in-law Frank Kell, along with twenty-nine other stockholders. The Wichita Falls Railway linked Henrietta with Wichita Falls. Built in 1894–1895, it was sold in 1911 to the Missouri-Kansas-Texas Railroad, also known as the Katy. The original eighteen miles of track was abandoned in 1970.

The Wichita Falls rancher, oilman, and philanthropist Joseph Sterling Bridwell owned a ranch in Clay County, among his multiple holdings.

Clay County is represented in the Texas House of Representatives by the Republican James Frank, a businessman from Wichita Falls.

All content from Kiddle encyclopedia articles (including the article images and facts) can be freely used under Attribution-ShareAlike license, unless stated otherwise. Cite this article:
Clay County, Texas Facts for Kids. Kiddle Encyclopedia.