This Edaphosaurus boanerges fossil skeleton from Archer County is on display in Harvard Museum of Natural History. 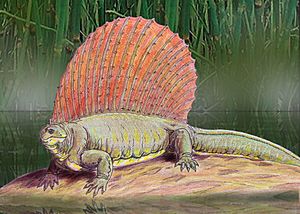 Archer County is a county located in the U.S. state of Texas. As of the 2020 census, its population was 8,560. Its county seat is Archer City. It is part of the Wichita Falls metropolitan statistical area.

Archer County is represented in the Texas House of Representatives by Republican James Frank, a businessman from Wichita Falls.

The Seymour Division of the sprawling 320,000 deeded acre (1400 km²) La Escalera Ranch is located north of Seymour, Texas in Baylor County and part of Archer County. The Seymour Division consists of 34,000 acres (120 km²) which was formally known as the Cross Bar Ranch when it was owned by the Claude Cowan Sr. Trust. The ranch was purchased in January, 2005 by the Gerald Lyda family and La Escalera Limited Partnership and is managed by partner Jo Lyda Granberg and her husband K. G. Granberg of Seymour. La Escalera Ranch extends over much of Pecos County and portions of Reeves, Brewster, Archer and Baylor Counties. It is known for its reputation herd of Black Angus cattle and its abundant wildlife.

Megargel Independent School District once served portions of Archer County, but it closed after the fall of 2006.

All content from Kiddle encyclopedia articles (including the article images and facts) can be freely used under Attribution-ShareAlike license, unless stated otherwise. Cite this article:
Archer County, Texas Facts for Kids. Kiddle Encyclopedia.