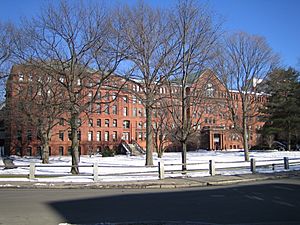 University Museum Building of the Harvard Museum of Natural History.

The Harvard Museum of Natural History is a natural history museum housed in the University Museum Building, located on the campus of Harvard University in Cambridge, Massachusetts.

It displays a sampling of specimens drawn from the collections of the University's three natural history research museums:

The museum is physically connected to the Peabody Museum of Archaeology and Ethnology at 26 Oxford Street. One admission grants visitors access to both museums. In December 2012, Harvard announced a new consortium, the Harvard Museums of Science and Culture, whose members are the Harvard Museum of Natural History, the Semitic Museum, the Peabody Museum, and the Collection of Historical Scientific Instruments. 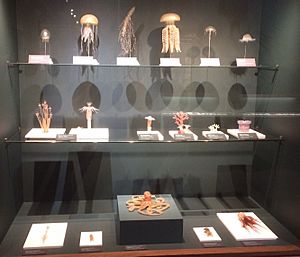 A sample of the Blaschka Glass Sea Creatures 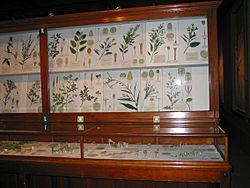 A sample of the Glass Flowers 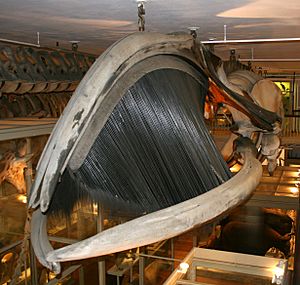 In the museum's permanent galleries, visitors encounter the diversity of life on Earth, from dinosaurs to fossil invertebrates and reptiles, to large mammals, birds and fish, and the only mounted Kronosaurus. The mineralogical galleries present a systematic display of meteorites, minerals and gemstones. The galleries also house the historic Ware Collection of Blaschka Glass Models of Plants, popularly known as the Glass Flowers and a new exhibition, Sea Creatures in Glass, displaying some of the Harvard Museum of Comparative Zoology's collection of the Blaschka models of marine invertebrates. In addition, a series of changing exhibitions bring focus to new research at the University. Current exhibitions include Thoreau's Maine Woods: A Journey in Photographs with Scot Miller (through February 2015),Mollusks: Shelled Masters of the Marine Realm, and New England Forests in the Zofnass Family Gallery.

The museum's educational programs provide a hands-on, observation-based approach. With a growing reputation as a source of unique and effective science education and a successful partnership with Cambridge public schools, the museum welcomes increasing numbers of school children and their families to its programs each year.

Public lectures are another of the museum's activities. The museum hosts regular free presentations by Harvard biologists, international conservationists, and popular authors that lead their audiences to a closer look at current issues in the world of science and nature.

A travel program complements the museum's mission to enhance awareness of the natural world. Travelling in small groups often led by Harvard science faculty, Museum travellers experience destinations that are of particular importance as recognized hotspots of biodiversity.

The museum is member-based, with over 3,200 current members, primarily from the Boston metropolitan area. While the museum is affiliated with the Harvard's Faculty of Arts and Sciences and receives important support from the University, it derives most of its operating income from admissions, membership, gifts, and programmatic revenues.

All content from Kiddle encyclopedia articles (including the article images and facts) can be freely used under Attribution-ShareAlike license, unless stated otherwise. Cite this article:
Harvard Museum of Natural History Facts for Kids. Kiddle Encyclopedia.