Peabody Museum of Archaeology and Ethnology facts for kids 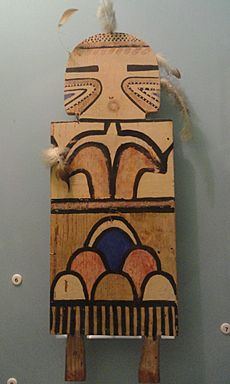 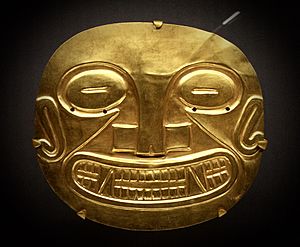 Coclé gold plaque, from Panama, circa 700 AD, excavated by a Peabody Museum expedition, 1930 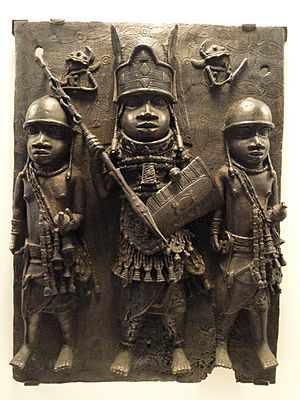 The Peabody Museum of Archaeology and Ethnology is a museum affiliated with Harvard University in Cambridge, Massachusetts. Founded in 1866, the Peabody Museum is one of the oldest and largest museums focusing on anthropological material, with particular focus on the ethnography and archaeology of the Americas. The museum is caretaker to over 1.2 million objects, some 900 linear feet of documents, 2,000 maps and site plans, and approximately 500,000 photographs. The museum is located at Divinity Avenue on the Harvard University campus. The museum is one of the four Harvard Museums of Science & Culture open to the public.

The museum was established as a gift from George Peabody, a native of South Danvers (now eponymously named Peabody), a wealthy American financier and philanthropist on October 8, 1866. Peabody committed $150,000 to be used, according to the terms of the trust, to establish the position of Peabody Professor-Curator, to purchase artifacts, and to construct a building to house its collections. Peabody directed his trustees to organize the construction of "a suitable fireproof museum building, upon land to be given for that purpose, free of cost or rental, by the President and Fellows of Harvard College." The museum opened its first exhibition consisting of a small number of prehistoric artifacts from the Merrimack Valley in Harvard University's Boylston Hall in 1867. In 1877, the long-awaited museum building was completed and ready for occupancy. The building that houses the Peabody was expanded in 1888 and again in 1913.

Peabody Museum is steward to archaeological, ethnographic, osteological, and archival collections from many countries and covering millions of years of human cultural, social, and biological history, with particular focus on the cultures of North and South America and the Pacific Islands, as well as collections from Africa, Europe, and Asia.

All content from Kiddle encyclopedia articles (including the article images and facts) can be freely used under Attribution-ShareAlike license, unless stated otherwise. Cite this article:
Peabody Museum of Archaeology and Ethnology Facts for Kids. Kiddle Encyclopedia.