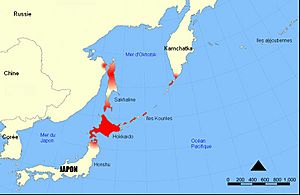 Modern area of the Ainu 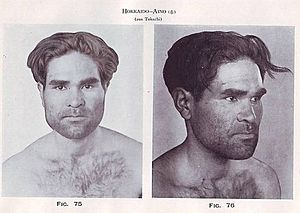 An Ainu man from Hokkaidō 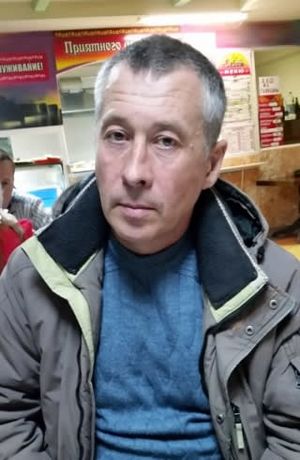 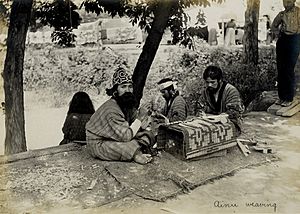 The Ainu people are the native population of northern Japan and the eastern part of Russia, mostly in the Amur river region, Sakhalin, the Kuril islands and on the Kamchatka Peninsula. The term is also used for their culture and language in the Ezo region (Hokkaido). 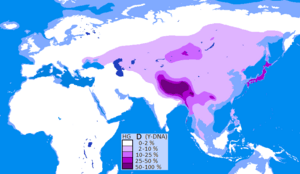 Distribution of haplogroup D, the main haplogroup of the Ainu people (in average 80% in modern Ainu). 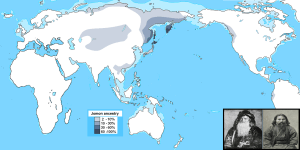 The majority of their ancestors, the Jōmon people, were a predominantly Caucasoid or Caucasian-related ethnic group which arrived in Japan about 30,000 – 15,000 years ago from Central Asia and southern Siberia. They were largely replaced by the proto-Japanese which arrived from southeastern China about 2,000 years ago. The Ainu have strong similarities with Palaeolithic Europeans and people of the Middle East as well as with Native American groups of the northwestern coastal culture area in North America. Some scholars think they were related to the Emishi of northern Honshu.

During and after the Yayoi period they were attacked by the early Japanese people. The Ainu and relative tribes lost most of their land in Honshū, many were killed or ensalved by the Yayoi-Japanese. After the rise of the Yamato, mostly no Ainu were left in Honshu. After time the Japanese began to conquer parts of Hokkaido and started to colonize the Ainu there. The Ainu fighted several wars but in the end lost against the Japanese and were enslaved by them. The Ainu in Russia had more luck and lived their traditional live until the Second world war, when they were included into Russia.

Today the AInu are recognized as native population of northern Japan and eastern Russia but still face discrimination in Japan because of their bodyhair and different phenotypes. Most Japanese outside of Hokkaido mistake the Ainu for foreigners or tourists.

Their culture is based on the ancient Jomon culture of northern Japan and eastern Russia. Their native folk religion has some similarities to early Shinto. Their gods are named kamuy, similar to the Japanese Kami. They practiced agriculture but were also hunter gatherers. The Ainu are famous for their beautiful wood work and art.

The Ainu lived in villages called kotan and were often built along rivers or lakes. Every villages consisted of at least four to seven families, sometimes more than ten. The traditional house was called cise or cisey.

A genetic study published in the scientific journal “Nature” by Jinam et al., using genome-wide DNA analyses, found that the Ainu have unique characteristics and are distinct from East-Eurasians. The Ainu have genes which are also found in Europeans.

Ainu-related DNA is found in northern Japanese, some Central Asians and several groups in southeastern Siberia.

Other studies found connections between the Ainu, Paleolithic Siberians and some Native Americans.

All content from Kiddle encyclopedia articles (including the article images and facts) can be freely used under Attribution-ShareAlike license, unless stated otherwise. Cite this article:
Ainu people Facts for Kids. Kiddle Encyclopedia.