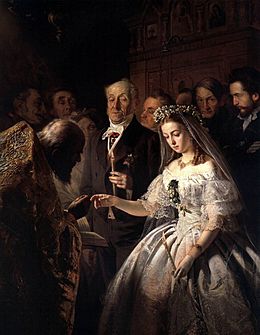 Unequal marriage, a 19th-century painting by Russian artist Pukirev. It depicts an arranged marriage where a young girl is forced to marry someone she doesn't want to.

An arranged marriage is when a couple are decided to wed by people other than themselves. In most cases, this is decided by their parents or other elders in their families, but can also be decided by religious figures, teachers, close friends of the family or others. It is mostly practised in Southern Asian, African, East and Middle Eastern cultures today, and in East and Southeast Asian cultures to some extent. Arranged marriages are not just an alliance between two individuals, it is an alliance between families. Unlike forced marriages, partners are usually only suggested to the single person in question. They can accept or refuse.

All content from Kiddle encyclopedia articles (including the article images and facts) can be freely used under Attribution-ShareAlike license, unless stated otherwise. Cite this article:
Arranged marriage Facts for Kids. Kiddle Encyclopedia.