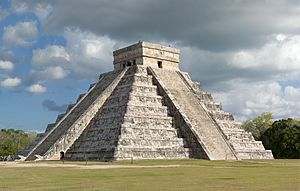 Chichén Itzá is a large Mayan city famous for a large, pyramid temple built by the Maya civilization. It is on the Yucatán Peninsula, about 120 km to the east of Mérida. The temple, called Castillo, is about 1 km in diameter. There are many temples and pyramids at Chichen Itza. Tourists, or visitors, were once able to climb some of the pyramids, but it was quite challenging because the steps are very steep and small. Climbing is no longer permitted.

Some of the most famous parts of Chichen Itza include: El Castillo:

This is the largest pyramid at Chichen Itza, and dedicated to Kukulkan, the Plumed Serpent. Every year on the fall and spring equinox the sun hits the side of the building making a show of light and shadow which looks like a snake along the steps of the building.

Temple of the Warriors:

Hundreds of columns surround a very big temple structure with carvings. Square columns are there that once held up the roof of the temple. These columns are carved on all four sides with figures of warriors wearing feathers.

This is the largest known ancient sports field in Central America, at 545 feet in length and 225 feet in width. Each end has a raised temple area. The sounds in the ballcourt are remarkable: a whisper from one end can be clearly heard at the other.

A cenote is an underground lake or river. This cenote is where royalty gave gifts to the gods.

It has 4 sides and each side has 91 steps

All content from Kiddle encyclopedia articles (including the article images and facts) can be freely used under Attribution-ShareAlike license, unless stated otherwise. Cite this article:
Chichen Itza Facts for Kids. Kiddle Encyclopedia.