Coba is an ancient Mayan city on the Yucatán Peninsula, located in the Mexican state of Quintana Roo. The site is the nexus of the largest network of stone causeways of the ancient Mayan world, and it contains many engraved and sculpted stelae that document ceremonial life and important events of the Late Classic Period (AD 600–900) of Mesoamerican civilization. The adjacent modern village bearing the same name, reported a population of 1,278 inhabitants in the 2010 Mexican federal census. 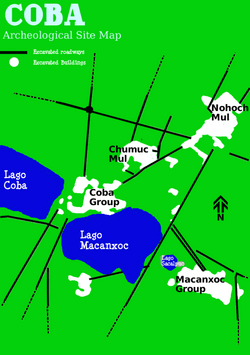 Coba is located around two lagoons. A series of elevated stone and plaster roads radiate from the central site to various smaller sites near and far. These are known by the Maya term sacbe (plural sacbeob) or white road. Some of these causeways go east, and the longest runs over 100 kilometres (62 mi) westwards to the site of Yaxuna.

The site contains a group of large temple pyramids known as the Nohoch Mul, the tallest of which, Ixmoja, is some 42 metres (138 ft) in height. Ixmoja is among the tallest pyramids on the Yucatán peninsula.

Coba was estimated to have had some 50,000 inhabitants (and possibly significantly more) at its peak of civilization, and the built up area extends over some 80 km². The site was occupied by a sizable agricultural population by the 1st century.

The bulk of a Coba's major construction seems to have been made in the middle and late Classic period, about 500 to 900 AD, with most of the dated hieroglyphic inscriptions from the 7th century. Coba remained an important site in the Post-Classic era and new temples were built and old ones kept in repair until at least the 14th century.

Sacbeob (Mayan plural of sacbe), or sacbes, were very common at the Coba site. They are raised pathways, usually stone paths at this site, that connected the clusters of residential areas to the main center of the site and the water sources.These paths were the connecting points to most things at the Coba site. They were the major feature discovered and preserved. Sacbeobs were the main reason why maps of Coba could be created. 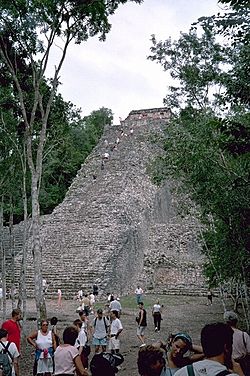 The archaeological site of Coba has increasingly become more visited by both national and international tourism in Mexico. One of the main attraction to visitors of Coba is the Ancient Pyramid which is still open for the public to climb its 130 steps up to the top of the site.

Outlined are the important artifacts and structures that can be viewed and experienced within the ruins of Coba:

All content from Kiddle encyclopedia articles (including the article images and facts) can be freely used under Attribution-ShareAlike license, unless stated otherwise. Cite this article:
Coba Facts for Kids. Kiddle Encyclopedia.