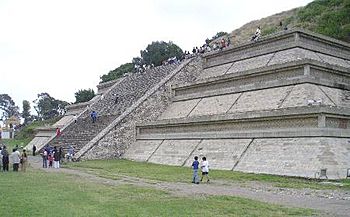 The mesoamerican pyramids were pyramids built by native american indians in Central America. They were mostly step pyramids. The Mayan pyramids are an example.

American peoples who have built pyramids include:

There are a number of famous step pyramids whose builders are not known, including the largest of all: the Great Pyramid of Cholula.

All content from Kiddle encyclopedia articles (including the article images and facts) can be freely used under Attribution-ShareAlike license, unless stated otherwise. Cite this article:
Mesoamerican pyramids Facts for Kids. Kiddle Encyclopedia.