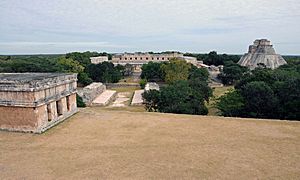 Uxmal is a large pre-Columbian city. The ruins are in Mexico today, in the state of Yucatán. According to the records of the Maya, the city was built around the year 500 AD. According to current research, about 25.000 people lived there. Most of the buildings that can be seen today were built between 700 and 1100. After 1200, there seems to be no new construction. The ruling family moved their capital elsewhere, and the population of the city declined.

According to the documents of the Spanish conquerors, the city still had some importance in the 1550s. It was probably abandoned soon afterwards, as the Spanish built no city nearby.

All content from Kiddle encyclopedia articles (including the article images and facts) can be freely used under Attribution-ShareAlike license, unless stated otherwise. Cite this article:
Uxmal Facts for Kids. Kiddle Encyclopedia.