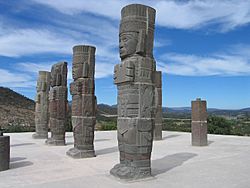 The Atlantes – columns in the form of Toltec warriors in Tula. 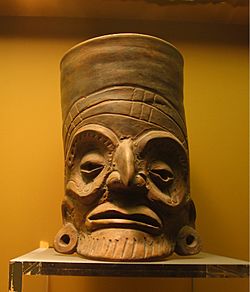 A rather expressive orange-ware clay vessel in the Toltec style.

Toltec is used by historians in different ways. It is either used to refer to certain people that lived in what is Mexico today, before Christopher Columbus came there. Some scholars also use the word to refer to the people that later developed into the Aztec civilisation. These people are only known from Aztec stories. It is not known if they actually formed one people or not.

All content from Kiddle encyclopedia articles (including the article images and facts) can be freely used under Attribution-ShareAlike license, unless stated otherwise. Cite this article:
Toltec Facts for Kids. Kiddle Encyclopedia.