Mayapan (Màayapáan in Modern Maya), (in Spanish Mayapán) is a Pre-Columbian Maya site a couple of kilometers south of the town of Telchaquillo in Municipality of Tecoh, approximately 40 km south-east of Mérida and 100 km west of Chichen Itza; in the state of Yucatán, Mexico.

Mayapan was the political and cultural capital of the Maya in the Yucatán Peninsula during the Late Post-Classic period from the 1220s until the 1440s.

Estimates of the total city population are 15,000–17,000 persons, and the site has more than 4,000 structures within the city walls, and additional dwellings outside.

The site has been professionally surveyed and excavated by archeological teams, beginning in 1939; five years of work was done by a team in the 1950s, and additional studies were done in the 1990s. Since 2000, a collaborative Mexican-United States team has been conducting excavations and recovery at the site, which continue. 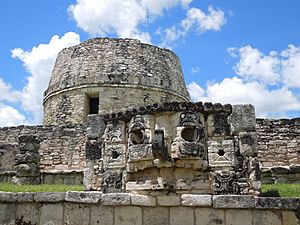 The Temple Redondo with a Mayan carving in the foreground. 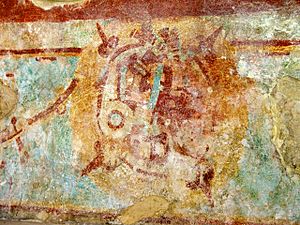 This mural partially survives in the Sala de los Frescos in Mayapán. In it appears a solar disk with the figure of a deity, possibly representing one of the transit of Venus that happened in years 1152 or 1275.

Mayapan is 4.2 square kilometers and has over 4000 structures, most of them residences, packed into this compound within the city walls. Built-up areas extend a half kilometer beyond the city walls in all directions. The stone perimeter wall has twelve gates, including seven major gates with vaulted entrances. The wall is 9.1 km long and is roughly ovate with a pointed northeast corner.

A.L. Smith, an archeologist with the Carnegie Institute, estimated 10–12,000 people lived within the walled city. There were numerous additional dwellings as well so the total population estimate could be between 15,000–17,000 people.

The Temple of Kukulcan, a large pyramid also known as the Castillo, is the main temple in Mayapan. It is located immediately to the east of the Cenote Ch'en Mul, which has caves radiating from it. In form, the Temple of Kukulcan (Structure Q-162 on the site map) is a radial four-staircase temple with nine terraces; it is generally similar to the Temple of Kukulcan at the earlier site of Chichen Itza. However, the Mayapan temple appears to be an inferior imitation of the one at Chichen Itza, and the city's buildings in general are not constructed as well as those in other Mayan cities. For example, most or all of the vaulted roofs in Mayapan have collapsed, while many of the better-built buildings at Chichen Itza remain intact. Other major temples in the ceremonial center include three round ones, which are unusual for the Maya area and are also linked to the deity Kukulkan/Quetzalcoatl in his wind god (Ehecatl) aspect. Unlike Chichen Itza, Mayapan has no ballcourts.

The extensive residential zones of the site are composed of dwellings and ancillary domestic structures, with those around the ceremonial district larger and of higher quality and those toward the fringes being generally poorer. The houses are often arranged in small patio groups surrounding small courtyards.

Houses were built haphazardly without organized streets. Lanes wind among the residences and walls. The residential areas of the site contain many cenotes, perhaps as many as 40. Settlement was the most dense in the southwestern part of the city where cenotes are more numerous.

A panorama of the Mayapan excavations from the top of the Castle of King Kukulcan.

Milpa, or mixed, fields may have been cultivated when Mayapan was inhabited.

Researchers have suggested that Mayapan was an import/export center, and that they often traded luxury goods, such as cotton, salt, and honey, for products of obsidian and metal, which they would have forged.

Today farmers use mixed fields, called the milpa fields, to cultivate maize, beans, squash, watermelons, mangoes, papayas and other crops. Also, citrus fruit such as oranges and limes are often grown within the domestic house groups of the local residents.

In the settlement zone, researchers found: white-tailed deer (8.4%), dog (1.4%), turkey (5.3%), iguana (14.5%), and fish (3.6%). Both turtle and rabbit remains were found in both sites, but they were consumed in small amounts (less than 1.5%). While excavating, the researchers noted many fish skeletons, but few fish heads. They concluded that the fish were being traded into Mayapan, and not collected near the site. If the fish had been prepared at the site, the heads would have been in the trash. Within the ceremonial center, numerous deer heads and teeth were found among the remains.(M.A. Masson, C. Peraza Lope 2008). 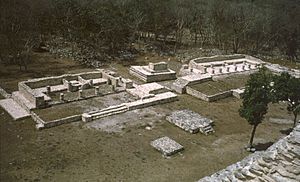 Mayapan was a major capital in the Yucatán, and there is extensive evidence that it had far-reaching trade routes, as seen in architecture and artifacts of other settlements in the region. A wide variety of goods were traded, including maize, honey, salt, fish, game, cloth, and birds.

All content from Kiddle encyclopedia articles (including the article images and facts) can be freely used under Attribution-ShareAlike license, unless stated otherwise. Cite this article:
Mayapan Facts for Kids. Kiddle Encyclopedia.