Yucatán is a state in the east of Mexico. About 1,820,000 people live in Yucatán. Its capital is called Mérida.

The state is on the Yucatán Peninsula. It has the state of Campeche to the southwest, and Quintana Roo to the southeast. The Gulf of Mexico is off its north coast.

The state was a very important region for the Mayan civilization. There are still some villages there with Mayan-descent people who speak the old language. There are also archaeological sites where Mayan remains are investigated. 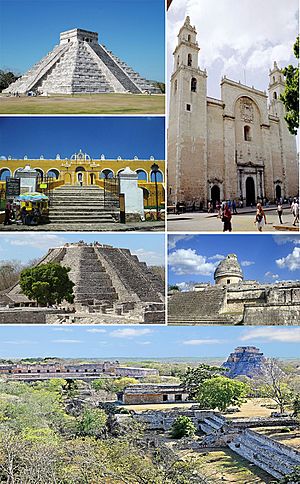 All content from Kiddle encyclopedia articles (including the article images and facts) can be freely used under Attribution-ShareAlike license, unless stated otherwise. Cite this article:
Yucatán (state) Facts for Kids. Kiddle Encyclopedia.