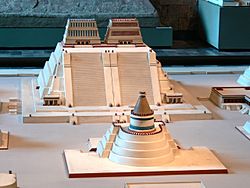 Scale model of the twin Great Temple of Tenochtitlan

The Templo Mayor (Great Temple) was one of the main temples of the Aztecs. It was in their capital city of Tenochtitlan, which is now Mexico City. Its architectural style belongs to the late Postclassic period of Mesoamerica. The temple was called the huei teocalli in the Nahuatl language. It was dedicated to two gods, Huitzilopochtli, god of war, and Tlaloc, god of rain and agriculture. Each one had a shrine at the top of the pyramid with separate stairways. The spire in the center of the image to the right was devoted to Quetzalcoatl in his form as the wind god, Ehecatl.

The Great Temple devoted to Huiztilopochtli and Tlaloc was approximately 100 by 80 m (328 by 262 ft) at its base. Construction of the first temple began sometime after 1325. It was rebuilt six times after that. The temple was destroyed by the Spanish in 1521. The modern-day archeological site lies just to the northeast of the Zocalo, or main plaza of Mexico City The site is part of the Historic Center of Mexico City, which was added to the UNESCO World Heritage List in 1987.

All content from Kiddle encyclopedia articles (including the article images and facts) can be freely used under Attribution-ShareAlike license, unless stated otherwise. Cite this article:
Templo Mayor Facts for Kids. Kiddle Encyclopedia.