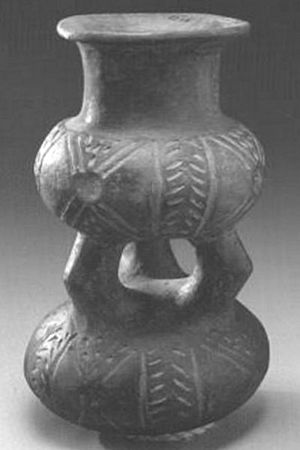 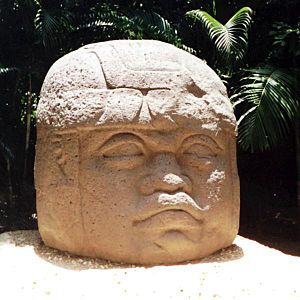 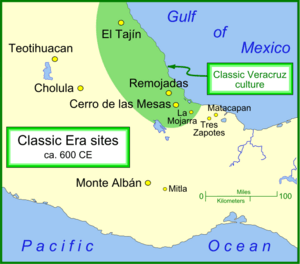 Looking at the history of pre-Columbian Mesoamerica one can see some rather different periods between the first humans and the early Colonial period (which followed the Spanish colonization of the Americas) in the end.

The Paleo-Indian (not so often Lithic) period or era is that which begins with the first signs of human presence in the region and leads to agriculture and other practices (e.g. pottery, permanent settlements) characteristic of proto-civilizations. In Mesoamerica, the end of this phase was at ca. 8,000 BC. It was a period of hunter-gatherers.

In this time agriculture and permanent villages developed in the region. Late in this era, people used pottery and started weaving with a loom.

Nation-states developed and with them the first large scale ceremonial architecture and cities. That were the Olmec civilization, the early Zapotec, Monte Alto Culture in Guatemala's pacifc lowlands, and Maya civilization.

Teotihuacan grows to a metropolis and its empire dominates Mesoamerica. During this time the cities of the Maya southern lowlands, such as Tikal, Palenque, and Copán have their greatest era.

The Classic Era ended earlier in Central Mexico, with the fall of Teotihuacan around the 7th century, than it did in the Maya area, which continued for centuries more. Around this time, many southern lowland sites (most notably in Tikal) experienced a short period of limited decline, called the Middle Classic Hiatus. The later period of Maya's continued growth is sometimes known as the Florescent Era.

In the early 20th century, the term Old Empire was sometimes given to this era of Maya civilization in an analogy to Ancient Egypt; the term is now considered inaccurate and has long been out of use by serious writers on the subject.

Many of the great nations and cities of the Classic Era collapsed, but some continue, such as in Oaxaca, Cholula, and the Maya of Yucatán, such as at Chichen Itza and Uxmal. This is sometimes seen as a period of increased chaos and warfare. The Toltec for a time dominate central Mexico in the 11th - 13th century, then collapse. The northern Maya are for a time united under Mayapan. The Aztec Empire rises in the early 15th century and seems on the path to gain a dominance over the whole region not seen since Teotihuacan, when Mesoamerica is discovered by Spain and conquered by the Conquistadores.

The late florescence of the northern Maya was sometimes called the New Empire in the early 20th century, but this term is no longer considered appropriate and is no longer used.

Arguably, the Post-Classic continued until the conquest of the last independent native state of Mesoamerica, Tayasal, in 1697.

All content from Kiddle encyclopedia articles (including the article images and facts) can be freely used under Attribution-ShareAlike license, unless stated otherwise. Cite this article:
Mesoamerican chronology Facts for Kids. Kiddle Encyclopedia.