The Pre-Columbian city now known as Copán is a locale in extreme western Honduras, in the Copán Department, near to the Guatemalan border. It is the site of a major Maya kingdom of the Classic era.

The kingdom, anciently named Xukpi (Corner-Bundle), flourished from the 5th century AD to the early 9th century, with antecedents going back to at least the 2nd century AD. Its name is an apparent reference to the fact that it was situated at the far southern and eastern end of Maya territory. The nearby modern village of Copán Ruinas itself may have anciently been known as Oxwitik.

Description of the ruins 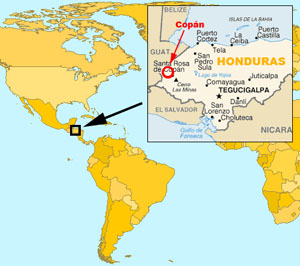 The site in Copan is perhaps best known for producing a remarkable series of portrait stelae, most of which were placed along processional ways in the central plaza of the city and the adjoining "acropolis" (a large complex of overlapping step-pyramids, plazas, and palaces). The stelae and sculptured decorations of the buildings of Copán are some of the very finest surviving art of ancient Mesoamerica.

Many structures are elaborately decorated with stone sculptures, usually constructed from a mosaic of carved stones of a size that one person could carry.

The site also has a large court for playing the Mesoamerican ballgame. 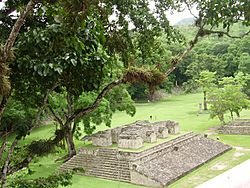 Ruins of one of the side buildings of the main ballcourt

At its height in the late classic period Copán seems to have had an unusually prosperous class of minor nobility, scribes, and artisans, some of whom had homes of cut stone built for themselves (in most sites a privilege reserved for the rulers and high priests), some of which have carved hieroglyphic texts.

The buildings suffered significantly from forces of nature in the centuries between the site's abandonment and the rediscovery of the ruins. There have been numerous earthquakes - none of the roofs of the stone buildings were intact when the site was rediscovered, and the hieroglyphic stairway had collapsed. 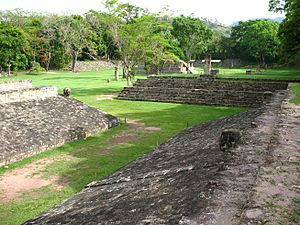 The Copán river changed course and meandered, destroying part of the acropolis (revealing in the process its stratigraphy in a large vertical cut) and apparently wiping out various subsidiary architectural groups in the region. In the long period when the site was overgrown the buildings and sculptures suffered from the invasive thick jungle vegetation and periodic forest fires.

Archeologists have consolidated and restored many structures at the site.

The fertile Copán River valley was long a site of agriculture before the first known stone architecture was built in the region about the 9th century BC.

A kingdom seems to have been established in Copán in 159. It grew into one of the most important Maya sites by the 5th century. Large monuments dated with hieroglyhic texts were erected in the city from 435 through 822.

Xukpi was one of the more powerful Maya city states, a regional power, although it suffered a catastrophic defeat at the hands of the kingdom located at Quirigua in 738. It eventually withered in the face of the depletion of natural resources which was a factor in bringing most of the Classic-Age Maya city-states to their end.

The area continued to be occupied after the last major ceremonial structures and royal monuments were erected, but the population declined in the 8th century - 9th century from perhaps over 20,000 in the city to less than 5,000.

The ceremonial center was long abandoned and the surrounding valley home to only a few farming hamlets at the time of the arrival of the Spanish in the 16th century.

Copan is a beautiful place too.

All content from Kiddle encyclopedia articles (including the article images and facts) can be freely used under Attribution-ShareAlike license, unless stated otherwise. Cite this article:
Copán Facts for Kids. Kiddle Encyclopedia.