John Lloyd Stephens (November 28, 1805 – October 13, 1852) was an American explorer, writer, and diplomat. Stephens was a pivotal figure in the rediscovery of Maya civilization throughout Middle America and in the planning of the Panama railroad.

John Lloyd Stephens was born November 28, 1805, in the township of Shrewsbury, New Jersey. He was the second son of Benjamin Stephens, a successful New Jersey merchant, and Clemence Lloyd, daughter of an eminent local judge. The following year the family moved to New York City. There Stephens received an education in the Classics at two privately tutored schools. At the age of 13 he enrolled at Columbia College, graduating at the top of his class four years later in 1822.

After studying law with an attorney for a year, he attended the Litchfield Law School. He passed the bar exam after completing his course of study, and practiced in New York City.

Stephens embarked on a journey through Europe in 1834, and went on to Egypt and the Levant, returning home in 1836. He later wrote several popular books about his travels and explorations.

In 1841, Stephens was elected to the American Philosophical Society.

He was recommended for the post of Minister to the Netherlands in 1837, but Martin Van Buren nominated Harmanus Bleecker, who served until 1842.

In 1846 Stephens was a delegate to the state constitutional convention, where he was responsible for the introduction and adoption of a conciliation court (small claims court).

Stephens read with interest early accounts of ruined cities of Mesoamerica by such writers and explorers as Alexander von Humboldt and Juan Galindo.

Stephens and his travelling companion, architect and draftsman Frederick Catherwood first came across Maya ruins at Copán, having landed in British Honduras (now Belize). They were astonished at their findings and spent two weeks mapping the site. Stephens surmised that it must have been built by some long-forgotten people, as he could not imagine it was the native Mayans; however, Catherwood noted the facial resemblance to modern Mayans. Stephens was actually able to buy the city of Copan for a sum of $50 and had dreams of floating it down the river and into museums in the United States.

They continued investigating Maya ruins with a return trip to Yucatán in October 1841. According to Stephens's book about the trip, they visited a total of 44 Mayan sites such as Mayapan, Uxmal, Kabah, the gateway at Labná, Sayil, Xtampak, Chichen Itza, Tulum, and Izamal. In Uxmal, they documented the Governor's House, the Nunnery Quadrangle and the Pyramid of the Magician. Catherwood also drew a famous view of the well at Bolonchén.

Catherwood's drawings and lithographs showed, without question, the Maya to have been the authors of some of the most artistic and intellectual works of pre-Columbian America. Besides large constructions, they produced works of artistic refinement such as stone and plaster sculptures, frescoes, painted pottery and bas-reliefs in wood. As a result of their explorations, Stephens and Catherwood argued convincingly that the Mayans built the ancient Central American cities in contrast to the theory that ethnic groups from European or Asian civilizations had built them. 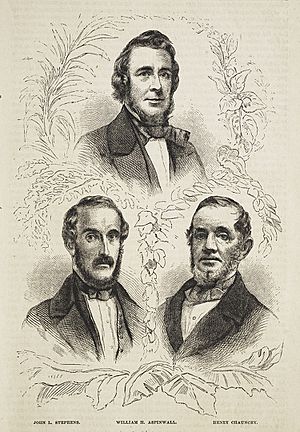 At the time England enjoyed a monopoly over the ocean navigation to and from the United States. Stephens obtained a charter from the state of New York, and incorporated the Ocean Steam Navigation Company. The company acquired two steam ships, the Washington and the Hermann which made journeys to Europe.

When the Panama Railroad Company was founded in 1849, Stephens was chosen to be Vice President. He visited Panama and New Granada to make arrangements for the laying of the railroad. On his way to Bogotá, the capital of New Granada, he fell off his mule and sustained severe injuries from which he never fully recovered. He returned to the United States, and was appointed President of the railroad. While in Panama, he was struck down by malaria in the spring of 1852. He recovered sufficiently to return to New York, only to have a recurrence of the disease. He died October 13, 1852. He was buried at New York City Marble Cemetery.

Stephens is the subject of the following works: Maya Explorer by Victor Wolfgang von Hagen, first published in 1947, and Jungle of Stone by William Carlsen (2016).

All content from Kiddle encyclopedia articles (including the article images and facts) can be freely used under Attribution-ShareAlike license, unless stated otherwise. Cite this article:
John Lloyd Stephens Facts for Kids. Kiddle Encyclopedia.