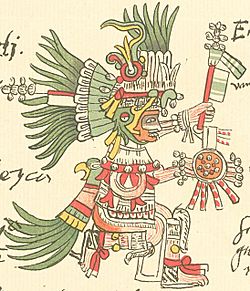 Huitzilopochtli, as depicted in the Codex Telleriano-Remensis.

In Aztec mythology, Huitzilopochtli, also spelled Uitzilopochtli, was a god of war, a sun god, and the patron of the city of Tenochtitlan. 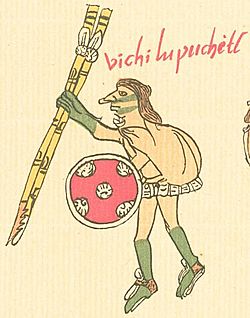 Huitzilopochtli in human form in the Codex Telleriano-Remensis.

The legend of Huitzilopochtli is recorded in the Mexicayotl Chronicle. His sister, Coyolxauhqui, tried to kill their mother because she became pregnant in a shameful way (by a ball of feathers). Her offspring, Huitzilopochtli, learned of this plan while still in the womb, and before it was put into action, sprang from his mother's womb fully grown and fully armed and killed his sister Coyolxauhqui, together with many of his 400 brothers and sisters. He then tossed his sister's head into the sky, where it became the moon, so that his mother would be comforted in seeing her daughter in the sky every night. He also threw his other brothers and sisters into the sky, where they became the stars.

All content from Kiddle encyclopedia articles (including the article images and facts) can be freely used under Attribution-ShareAlike license, unless stated otherwise. Cite this article:
Huitzilopochtli Facts for Kids. Kiddle Encyclopedia.