Wichita Falls ( WITCH-ə-taw) is a city in and the county seat of Wichita County, Texas, United States. Wichita Falls is the principal city of the Wichita Falls Metropolitan Statistical Area, which encompasses all of Archer, Clay, and Wichita Counties. According to the 2010 census, the city had a population of 104,553, making it the 29th-most populous city in Texas. In addition, Wichita Falls' central business district is five miles (8 km) from Sheppard Air Force Base which is home to the Air Force's largest technical training wing and the Euro-NATO Joint Jet Pilot Training (ENJJPT) program, the world's only multi-nationally manned and managed flying training program chartered to produce combat pilots for both USAF and NATO.

Of interest is the Newby-McMahon Building (otherwise known as "world's littlest skyscraper"), constructed downtown in 1919 and featured in Robert Ripley's Ripley's Believe It or Not!. 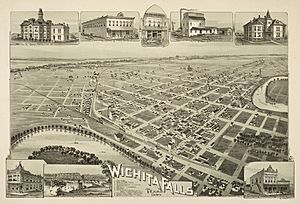 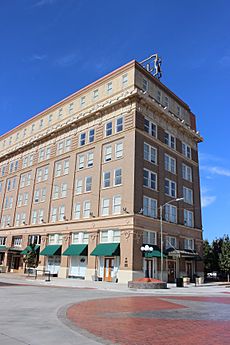 Kemp-Kell Building, circa 1910, now known as the Holt Hotel, was one of the first five-story office buildings in the city.

The Choctaw Native Americans settled the area in the early 19th century from their native Mississippi area once Americans negotiated to relocate them after the Treaty of Dancing Rabbit Creek. American settlers arrived in the 1860s to form cattle ranches. The city was officially titled Wichita Falls on September 27, 1872. On that day, a sale of town lots was held at what is now the corner of Seventh and Ohio Streets – the birthplace of the city. The Fort Worth & Denver City Railway arrived in September 1882, the same year the city became the county seat of Wichita County. The city grew westwards from the original FW&DC train depot which was located at the northwest corner of Seventh Street and the FW&DC. This area is now referred to as the Depot Square Historic District, which has been declared a Texas Historic Landmark.

The early history of Wichita Falls well into the 20th century also rests on the work of two entrepreneurs, Joseph A. Kemp and his brother-in-law, Frank Kell. Kemp and Kell were pioneers in food processing and retailing, flour milling, railroads, cattle, banking, and oil.

A flood in 1886 destroyed the original falls on the Wichita River for which the city was named. After nearly 100 years of visitors wanting to visit the nonexistent falls, the city built an artificial waterfall beside the river in Lucy Park. The recreated falls are 54 ft (16 m) high and recirculate at 3,500 gallons per minute. They are visible to south-bound traffic on Interstate 44.

The city is currently seeking funding to rebuild and restore the downtown area. Downtown Wichita Falls was the city's main shopping area for many years, but lost ground to the creation of new shopping centers throughout the city beginning with Parker Square in 1953 and other similar developments during the 1960s and 1970s, culminating with the opening of Sikes Senter Mall in 1974.

Wichita Falls was once home to offices of several oil companies and related industries, along with oil refineries operated by the Continental Oil Company (now Conoco Phillips) until 1952 and Panhandle Oil Company (later American Petrofina) until 1965. Both firms continued to use a portion of their former refineries as gasoline/oil terminal facilities for many years.

A devastating tornado hit the north and northwest portions of Wichita Falls along with Sheppard Air Force Base during the afternoon of April 3, 1964. As the first violent tornado on record to hit the Wichita Falls area, it left seven dead and more than 100 injured. Additionally, the tornado caused roughly $15 million in property damage with about 225 homes destroyed and another 250 damaged. It was rated as an F5, the highest rating on the Fujita scale, but it is overshadowed by the 1979 tornado.

An F4 tornado struck the heavily populated southern sections of Wichita Falls in the late afternoon on Tuesday, April 10, 1979 (known locally as "Terrible Tuesday"). It was part of an outbreak that produced 30 tornadoes around the region. Despite having nearly an hour's advance warning that severe weather was imminent, 42 people were killed (25 in vehicles) and 1,800 were injured because it arrived just in time for many people to be driving home from work. It left 20,000 people homeless and caused $400 million in damage, a U.S. record not topped by an individual tornado until the F5 Moore-Oklahoma City tornado of May 3, 1999.

During the 2015 Texas–Oklahoma floods, Wichita Falls broke its all-time record for the wettest month, with 17.00 inches of rain recorded in May 2015.

Wichita Falls is no longer experiencing drought conditions. During a three-week period in May 2015, 17 inches of rain filled the city's water-source lakes, Arrowhead and Kickapoo, ending the drought. The lakes went from just below 19% capacity to 100% capacity. The drought began in 2011, when the city experienced 100 days of 100 °F weather and a significant decline in annual rainfall. The city averages 28.5 in of rain a year. In 2011, the city received only 13 in; 2012 had 19.75 in, and in 2013 23 in. The city implemented significant conservation efforts and constructed a direct potable reuse system (DPR) that took treated wastewater, which normally emptied into the Wichita River, and sent it to the water treatment plant, where it was blended with raw lake water and treated a total of five times through various cleaning processes, all approved and monitored by the Texas Commission on Environmental Quality. The blended and treated water was then placed into the water system. City Mayor Glenn Barham explained, "This reuse system will put five million gallons [of water] back in the distribution system each day. The city saves five million gallons from being taken out of the lake." Within 7 months, the DPR produced 1 billion gallons of source water. 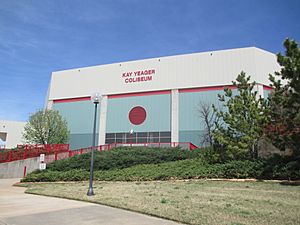 Nearby Lake Wichita was dredged in 1901 at a cost of $175,000 through the efforts of entrepreneur Joseph Kemp. The 234-acre (95 ha) Lake Wichita Park is on the north shore of the lake. This park offers a 2.6-mile concrete hiking and bicycling trail that runs from the southern tip of the park at Fairway Avenue to the dam. The trail resumes northward to Lucy Park. The park has a playground, basketball courts, and multiple picnic areas. The 10-unit picnic shelter can seat 60 people and is available for rent. The park also has two lighted baseball and two lighted softball fields, three lighted football fields, and an 18-hole disc golf course. The park has the only model airplane landing strip in the Texas state park system. An off-leash dog park is available.

Because of drought, the fish population in Lake Wichita has been damaged by golden algae blooms and periods of low dissolved oxygen. Therefore, the lake was not recommended in 2013 as a destination for fishing. When available, the fish population consists mostly of white bass, hybrid striped bass, channel catfish, and white crappie. Camping facilities are also available.

Wichita Falls is the home of the annual Hotter'N Hell Hundred, the largest century bicycle ride in the United States.

Lucy Park is a 170-acre (69 ha) park with a log cabin, duck pond, swimming pool, playground, frisbee golf course, and picnic areas. It has multiple paved walkways suitable for walking, running, biking, or rollerskating, including a river walk that goes to a recreation of the original falls for which the city was named (the original falls were destroyed in a 19th-century flood; the new falls were built in response to numerous tourist requests to visit the "Wichita Falls"). It is one of 37 parks throughout the city. The parks range in size from small neighborhood facilities to the 258 acres of Weeks Park featuring the Champions Course at Weeks Park, an 18-hole golf course. In addition, an off-leash dog park is within Lake Wichita Park and a skatepark adjacent to the city's softball complex. Also, unpaved trails for off-road biking and hiking are available.

The Professional Wrestling Hall of Fame relocated to Wichita Falls from Amsterdam, New York, in November 2015.

Efforts to create an additional freeway along the path of Kell Boulevard for U.S. 82–277 began in 1967 with the acquisition of right-of-way that included a former railroad right-of-way and the first project including construction of the present frontage roads completed in 1977, followed by freeway lanes, overpasses, and on/off ramps in 1989 from just east of Brook Avenue west to Kemp Boulevard; similar projects west from Kemp to Barnett Road in 2001 followed by Barnett Road west past FM 369 in 2010 to tie in which a project now underway to transform U.S. 277 into a continuous four-lane expressway between Wichita Falls and Abilene.

Greyhound Lines provides intercity bus service to other locations served by Greyhound via its new terminal at the Wichita Falls Travel Center located at Fourth and Scott in downtown. Skylark Van Service shuttles passengers to and from Dallas-Fort Worth International Airport on several runs during the day all week long.

The Wichita Falls Municipal Airport is served by American Eagle, with four flights daily to the Dallas-Fort Worth International Airport. The Kickapoo Downtown Airport and the Wichita Valley Airport serve smaller, private planes.

All content from Kiddle encyclopedia articles (including the article images and facts) can be freely used under Attribution-ShareAlike license, unless stated otherwise. Cite this article:
Wichita Falls, Texas Facts for Kids. Kiddle Encyclopedia.