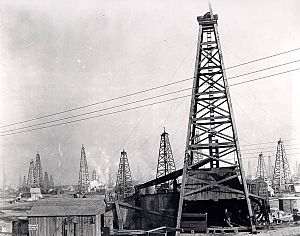 Burkburnett is a city in Wichita County, Texas, United States. It is part of the Wichita Falls, Texas Metropolitan Statistical Area. The population was 10,811 at the 2010 census. The community newspaper, the Burkburnett Informer/Star, is published each Thursday.

According to the United States Census Bureau, Burkburnett has a total area of 9.5 square miles (24.6 km²), all of it land.

Originally settled by ranchers as early as 1856, this community was known by some locals as Nesterville. By 1880, the town had a small store with a population of 132. From 1882 until 1903, a post office operated there under the designation Gilbert, named after the North Texas pioneer Mabel Gilbert. In 1906, a nearby wealthy rancher named Samuel Burk Burnett sold more than 16,000 acres (65 km²) of his land in northern Wichita County to a group of investors who were seeking to extend into the wheat-growing area of Western Oklahoma the Wichita Falls and Northwestern Railway, one of the Frank Kell/Joseph A. Kemp properties based in Wichita Falls.

Within Burnett’s former land near the railroad, lots were auctioned off the following year and a post office was established. The town was named Burkburnett by U.S. President Theodore Roosevelt, who visited the area for a wolf hunt that was hosted by the wealthy rancher Burnett. In 1912, oil was discovered west of the town, attracting thousands to the area, and by 1918, about 20,000 people had settled around the oilfield. This part of the town's history was chronicled in the film, Boom Town with Clark Gable and Spencer Tracy. The Great Depression had a negative impact on the town’s population, which was boosted again in 1941 as Sheppard Air Force Base was established nearby.

Fashion designer Nolan Miller was born in Burkburnett in 1933.

The climate in this area is characterized by hot, humid summers and generally mild to cool winters. According to the Köppen climate classification system, Burkburnett has a humid subtropical climate, Cfa on climate maps.

All content from Kiddle encyclopedia articles (including the article images and facts) can be freely used under Attribution-ShareAlike license, unless stated otherwise. Cite this article:
Burkburnett, Texas Facts for Kids. Kiddle Encyclopedia.