The Missouri–Kansas–Texas Railway (reporting mark MKT) is a former Class I railroad company in the United States, with its last headquarters in Dallas, Texas. Established in 1865 under the name Union Pacific Railway, Southern Branch, it came to serve an extensive rail network in Texas, Oklahoma, Kansas, and Missouri. In 1988, it merged with the Missouri Pacific Railroad; today, it is part of Union Pacific Railroad.

In the 1890s the MKT was commonly referred to as "the K-T", because for a time it was the Kansas-Texas division of the Missouri Pacific Railroad and "KT" was its abbreviation in timetables as well as its stock exchange symbol. This soon evolved into the nickname "the Katy".

The Katy was the first railroad to enter Texas from the north. Eventually, the Katy's core system linked Parsons, Emporia, Fort Scott, Junction City, Olathe, and Kansas City, Kansas; Kansas City, Joplin, Columbia, Jefferson City, and St. Louis, Missouri; Tulsa; Wagoner; and Oklahoma City, Oklahoma; Dallas, Fort Worth, Waco, Temple, Austin, San Antonio, Houston, and Galveston, Texas. An additional mainline between Fort Worth and Salina, Kansas, was added in the 1980s after the collapse of the Chicago, Rock Island and Pacific Railroad; this line was operated as the Oklahoma, Kansas and Texas Railroad (OKKT). Former Rock Island trackage rights acquired by the Katy also gave it access to Lincoln and Omaha, Nebraska and Council Bluffs, Iowa. 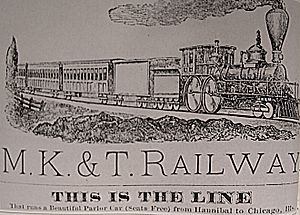 An 1881 advertisement for the line 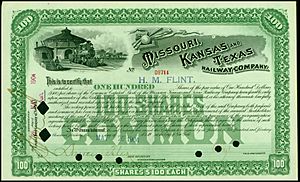 The Missouri, Kansas & Texas Railroad was incorporated in May 1870 in Junction City, Kansas. Ostensibly the original goal of the company was to build a supply railroad connecting the frontier military bases of Fort Riley, Fort Gibson and Fort Scott. Upon its incorporation the MK&T acquired the Union Pacific Railway, Southern Branch (est. 1865) and its 182 miles (293 km) of track in Kansas. (Union Pacific Railway was, for a period of several years in the late 19th century, the official name of the unrelated Union Pacific Railroad, which later acquired MKT as part of the Missouri Pacific Railroad.)

At the time of its 1870 incorporation, consolidations were also made with the Labette & Sedalia Railway Co. and the Neosho Valley & Holden Railway Co.; MK&T also acquired the Tebo & Nosho Railroad Co., the St. Louis & Santa Fe Railroad Co., and the Hannibal & Central Missouri Railroad Co. Combined with the UP Southern Branch, these small, newly built railroads formed the foundation on which the Katy would build.

Congress had passed acts promising land grants to the first railroad to reach the Kansas border via the Neosho Valley. The Katy portion of the former UP Southern Branch, which had begun building from Fort Riley just north of Junction City, Kansas, was in a heated competition for the prize. On June 6, 1870, Katy workers laid the first rails across the Kansas border, winning the race. Congress' promised land grants were never made, as the courts overturned the grants because the land was in Indian Territory and was the property of the Indian tribes.

The Katy continued its push southward, laying track through the territory and reaching Texas in 1872, acquiring other small railroads while extending its reach to Dallas in 1886, Waco in 1888, Houston in April 1893 and to San Antonio in 1901. 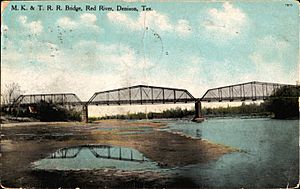 When the Katy railroad reached Houston, its joint ownership of the Galveston, Houston and Henderson Railroad gave it immediate access to the Port of Galveston and its ocean-going shipping on the Gulf of Mexico.

In 1896, as a publicity stunt set up by William Crush, the Katy crashed two locomotives head-on, pulling loaded trains, at a site that came to be known thereafter as Crush, Texas. The collision occurred before more than 40,000 spectators, three of whom died (and several were injured) by debris from the exploding boilers. The ragtime composer and pianist Scott Joplin, who was performing in the area at the time, commemorated the event in his song "The Great Crush Collision March" (which he dedicated to the Missouri-Kansas-Texas Railway).

From 1915 until January 4, 1959, the Katy, in a joint venture with the St. Louis – San Francisco Railway (popularly known as the Frisco), operated the Texas Special from St. Louis to Dallas, Ft. Worth, and San Antonio. It sported rail cars with names including Sam Houston, Stephen F. Austin, David Crockett, and James Bowie after prominent men of the state. 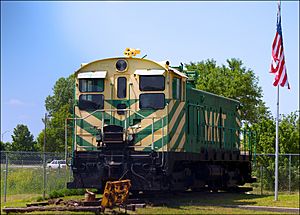 On August 12, 1988 the Missouri Pacific Railroad (MoPac) and its owner, Union Pacific, purchased the Katy with approval from the Interstate Commerce Commission. The merging and restructuring of railroads during the 1980s had cost the Katy much overhead traffic, and it had been seeking a merger partner. On December 1, 1989 the Katy was merged into the MoPac, which is now part of the Union Pacific system.

In the "rails to trails" program, much of the Missouri track line has been adapted for use as the Katy Trail State Park, including a spur to Columbia, a Missouri State Park which runs along the Missouri River for the major portion of its route. In downtown Dallas, a 3.5-mile (6 km) long section called the Katy Trail is being converted into a multi-use trail linking White Rock Lake to the American Airlines Center.

In 1997 the segment linking Katy, Texas to downtown Houston was abandoned, and stripped of rails soon after. The section between Katy and Interstate 610 was purchased by the Texas Department of Transportation in 1998 for the expansion of Katy Freeway. The line that went into Houston was purchased by the city's Parks and Recreation Department. In 2009 it was adapted and paved as the Heights Bike Trail. 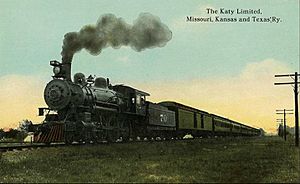 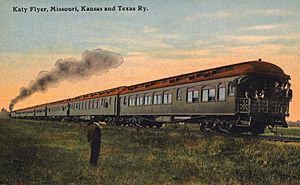 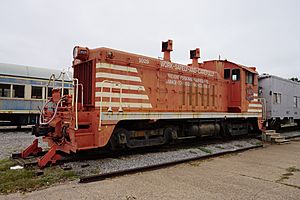 MKT EMD NW2 No. 1029 at the Wichita Falls Railroad Museum

In its final years, the Katy acquired several locomotives second-hand which, due to its impending acquisition by Union Pacific, were not painted into the standard green and yellow scheme. MKT acquired 18 GP40s from Conrail in late 1983 that were numbered 231-248.

In 1985, three additional GP38s were purchased from Conrail that were numbered 322-324 and finally, 19 GP38ACs were purchased from Illinois Central Gulf and numbered 325-343. The changes in MKT's red paint were most likely due to problems with fading in the intense Texas sun. This may also have been the reason to change to green in 1970.

All content from Kiddle encyclopedia articles (including the article images and facts) can be freely used under Attribution-ShareAlike license, unless stated otherwise. Cite this article:
Missouri–Kansas–Texas Railroad Facts for Kids. Kiddle Encyclopedia.